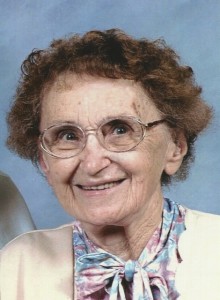 Marjorie L. Schoephoerster (Clark) entered the United States Army on May 18, 1943, in , served during the World War II era and reached the rank of First Lieutenant before being discharged on July 7, 1945 in 135th General Hospital.

Marjorie L. Schoephoerster (Clark) is buried at Zion Cemetery in Sumner, Iowa and can be located at

Funeral services will be held 2:00 p.m. Saturday, March 28, 2015, at the United Methodist Church in Sumner, Iowa with Rev. Michael Christie officiating. Interment will follow at Zion Cemetery, rural Sumner with military rites provided by Thomas E. Woods Post #223, American Legion, Sumner, Iowa. Friends may call from 10:00 a.m. to noon Saturday at the Hillcrest Home Chapel in Sumner and for one hour preceding services at the church on Saturday. Memorials may be made in her name to the Salvation Army or to a charity of the donor’s choice. Becker-Milnes Funeral Home in Sumner is assisting Marjorie’s family.

Marjorie Lenore, daughter of C. Thomas and Helen (Clarke) Clark was born June 3, 1921, at Des Moines, Iowa. She received her education in the Des Moines Schools, graduating from Lincoln High School in 1938. She received her R.N. degree from Mercy Hospital School of Nursing in Des Moines. She entered the U.S. Army Nurse Corps in May of 1943 and served until December of 1945 during World War II. She was commissioned to First Lieutenant and was stationed in England. On August 28, 1945, she was united in marriage with Eldon W. Schoephoerster in Des Moines. Marjorie completed her military obligation before joining Eldon in Sumner. The couple farmed for many years prior to moving in to Sumner in 1980. She was employed as a nurse at Community Memorial Hospital in Sumner for ten years and over fifteen years at the Hillcrest Home, prior to retiring in 1994. She was an active member of the United Methodist Church in Sumner and the Thomas E. Woods Post #223, American Legion of Sumner. Marjorie was proud to have been on an honor flight to Washington, D.C. recently.

In addition to her husband, who died May 11, 2007, and her parents, Marjorie was preceded in death by two sisters, Margaret Coe and Patricia Jones.