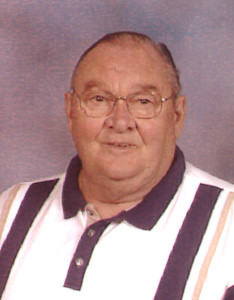 LuVerne Lyle Aves entered the United States Army on April 26, 1943, in Camp Dodge, IA, served during the World War II era and reached the rank of Technician Fourth Grade before being discharged on December 29, 1945 in Fort Leavenworth, KS.

LuVerne Lyle Aves is buried at Harlington Cemetery in Waverly, IA, Iowa and can be located at

LuVerne was born on October 7, 1924, in Marshalltown, Iowa, the son of Lyell and Marie (Hennies) Aves. He attended the Mason City High School. Vern entered the United States Army in 1943, serving in WWII where he earned the rank of Sargent and the bronze Star. During his service he was stationed at Aberdeen Proving Ground, Scofield Barracks, Hawaii, and Iwo Jima. He was honorably discharged in 1945, and he returned to Mason City where he went to work for Deckers. He met Arline while she was teaching his younger siblings in Manly, Iowa. The couple would be united in marriage on February 19, 1948, at St. Paul’s Lutheran Church in Waverly. In 1951, they moved to Waverly and Vern went to work for Shield Bantam, in 1962 the coupled moved to Waterloo and Vern worked for Martin Brothers, Cedar Falls, and later Martin Brothers, Waterloo.

Vern was a past member of the Shriners, VFW, and AMVETS. His enjoyments included golfing, hunting, fishing, playing cards, and gardening, however, what Vern enjoyed most was spending time with his children and grandchildren.

Funeral services will be held at 10:30 a.m. on Saturday, June 7, at St. Paul’s Lutheran Church in Waverly with Pastor Joyce Sandberg officiating. Burial will follow at Harlington Cemetery in Waverly. Visitation will be held on Friday, June 6, at the Kaiser-Corson Funeral Home in Waverly where the family will greet friends from 4 to 7 p.m. Memorials can be directed to Vern’s family and online condolences may be left at www.kaisercorson.com.
– See more at: http://www.kaisercorson.com/obituary/LuVerne-Lyle-Aves/Waterloo-IA/1388253#sthash.OLVICiLX.dpuf