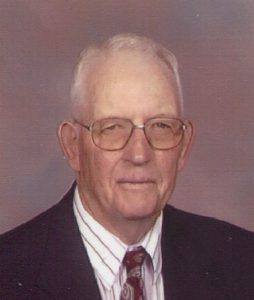 Luvern Wehling entered the United States Army on December 2, 1954, in Des Moines, IA, served during the Korean War era and reached the rank of Private First Class before being discharged on November 16, 1956 in Fort Sheridan, IL.

Luvern Wehling is buried at St. Johns Lutheran (Buck Creek) Cemetery in Sumner, Iowa and can be located at

Luvern Wehling, of Sumner, died Saturday, August 22, 2015, at Cedar Valley Hospice Home in Waterloo after a lengthy struggle with cancer.

Funeral services will be held 10:30 a.m., Tuesday, August 25, 2015, at St. John Lutheran Church-Buck Creek with Rev. Sandra Burroughs officiating. Interment will follow at the Church Cemetery with military rites provided by Wayne Teisinger Post #5661, V.F.W. of Readlyn. Friends may call from 4:00 p.m. to 7:00 p.m., Monday, August 24, 2015, at Becker-Milnes Funeral Home in Sumnerand for one hour preceding services on Tuesday. Memorials may be made in his name to St. John Lutheran Church-Buck Creek.

Luvern, son of John and Amanda (Huebner) Wehling, was born, February 18, 1926, near Readlyn in rural Black Hawk County, Iowa. He was baptized and confirmed in the Lutheran Faith and received his education in the rural schools near Readlyn. On October 12, 1947, he was united in marriage with Bernice Buenzow at St. John Lutheran Church-Buck Creek. He enlisted in the U.S. Army and was stationed in Germany during the Korean War. The couple made their home in the Readlyn and Buck Creek areas, where they dairy farmed. Luvern retired from dairy farming in the early 1990’s. He was a long time member of St. John Lutheran Church-Buck Creek and of the V.F.W. Post #5661 in Readlyn. He enjoyed fishing, and fishing at the pond he built for the past several years.

In addition to his wife, Bernice who died in 1998, and his parents, Luvern was preceded in death by his siblings, Clara Bohle, Bertha Strottman, Helen Oltrogge, Lucille Schumacher, Florence Kuker, and Art, Roy, and Lawrence Wehling.