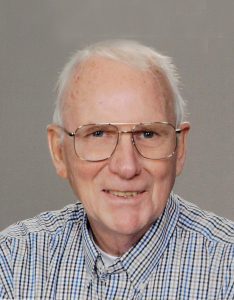 Lowell Mac Snyder entered the United States Army on June 13, 1961, in Des Moines, IA, served during the Vietnam War era and reached the rank of Specialist Fifth Grade before being discharged on June 12, 1964 in Fort Riley, KS.

Lowell Mac Snyder is buried at Faith United Church of Christ Cemetery in Tripoli, Iowa and can be located at

Mac was born on July 24, 1943, in Tripoli, Iowa, the son of Aura Marie (Parker) and Jack Snyder. He was baptized on October 3, 1943 and confirmed on April 7, 1957, both at the Congregational Church in Tripoli. After graduating from Tripoli High School in 1961, Mac served in the United States Army until his honorable discharge in June of 1964. He then attended Wartburg College. On December 23, 1961, Mac was united in marriage to Betty Elaine Osborn at Grace Lutheran Church in Tripoli. Mac worked for John Deere for 30 years, and also farmed with his Dad and brother, Phil. He retired in June of 1995. Directly after his retirement, the couple moved to Leech Lake, MN. They later moved to Waterville, IA, and then back to Waverly, to be close to their beloved grandchildren.

Mac was a member of St. John Lutheran Church in Waverly. He enjoyed hunting, birding and fishing. Leech Lake and Jim’s Caviar Camp were two of his favorite places to fish. Mac and Betty also liked to travel and visited all of the United States recognized by Mac. However, his greatest joy was his grandchildren and great-grandchildren.

Mac’s memory is honored by his wife of over 56 years, Betty; a daughter, Darci (Ed) Huber of Lake Elmo, MN; a son, Nathan (Christy) Snyder of Waverly; five grandchildren, Samantha, Andrew and Haidyn Snyder, Jessi Cross, and Brittany Frascht; four great-grandchildren, Anniston, Selah and Eden Cross, and Harper Hahn; one brother, Warren (Diane) Snyder of Omaha, NE; and many nieces and nephews. He was preceded in death by his parents; one brother, Phil Snyder; and Betty’s parents, Leonard and Anne Osborn.

Funeral services will be held at 11:00 a.m., on Wednesday, February 21, 2018, at St. John’s Lutheran church in Waverly, with Pastor Jon Ellingworth officiating. Burial will follow at Faith United Church of Christ Cemetery in Tripoli, Iowa. Visitation will be on Tuesday, February 20, 2018, from 4:00 to 7:00 p.m. at Corson Funeral Home in Waverly, and also one hour prior to the service at the church on Wednesday. Memorials may be directed to Waverly-Shell Rock Wrestling Pins for Cancer, in honor of Mac Snyder. Donations are directed to St. Jude’s Children’s Research Hospital, and may be made at https://pledgeit.org/waverly-shell-rock-wrestling-for-pin-cancer. Online condolences may be left at www.kaisercorson.com. Kaiser-Corson Funeral Home in Waverly is assisting the family. 319-352-1187