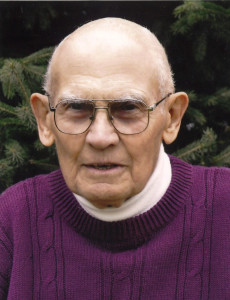 Louis Glenn Ingham entered the United States Army on January 5, 1943, in Camp Dodge, IA, served during the World War II era and reached the rank of Sergeant before being discharged on January 13, 1946 in Fort Leavenworth, KS.

Louis Glenn Ingham is buried at Harlington Cemetery in Waverly, IA, Iowa and can be located at

Louis Glenn Ingham, age 91, of Waverly, Iowa, passed gently to live with the Lord on Thursday morning, June 26th, 2014 while in respite care at Waverly Health Center. Born in Waverly on September 20, 1922, he was a 1940 graduate of Waverly High School. Louis met his future wife, Ardath Marion Hostetler, while studying there. He also attended Wartburg College and was a longtime member of First Baptist Church in Waverly.

He possessed a great love for our country and was proud to serve in the South Pacific theatre during World War II. Honorably discharged in January 1946, he married Ardath that autumn, on October 25th. After the war he was first employed by Shield Bantam, then went on to become a self-employed building contractor; first in Waverly and later in Broomfield Colorado and on the western slope of Colorado. In his “retirement,” Louis remained very active on the family farm in Waverly.

A loving husband, father, grandfather and great-grandfather, Louis instilled in his family an abiding faith in God and a deep patriotism for our country. Not long after returning from his service in World War II, he wrote, “One of the most important lessons taught to me during my three years of Army life was that of being thankful; to realize with a new meaning how thankful we should be for things you and I are apt to take for granted.” He demonstrated that sense of thankfulness every day: in the way he lived his life, in how he raised his children and in his service to his community. His family is, indeed, grateful for many years with a truly special man.

Visitation will occur at Kaiser-Corson Funeral Home in Waverly on Sunday, June 29th from 3 to 7 p.m. Services will be held at First Baptist Church in Waverly on Monday, June 30th at 11 a.m., with grandson Pastor Ben Epley officiating. Private family burial will occur at Harlington Cemetery, with military rites provided by the Waverly Area Veterans Honor Guard. Memorials may be directed to First Baptist Church in Waverly. Online condolences may be left at www.kaisercorson.com.

Kaiser-Corson Funeral Home will be assisting the family; call 319-352-1187 for more information. – See more at: http://www.kaisercorson.com/obituary/Louis-G.-Ingham/Waverly-IA/1394464#sthash.L0cRIQZ1.dpuf