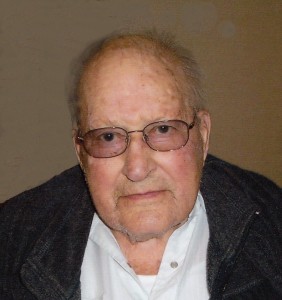 Lloyd Arnold Petersen entered the United States Army on January 20, 1941, in Fort Des Moines, IA, served during the World War II era and reached the rank of Private First Class before being discharged on November 1, 1945 in Fort Leavenworth, KS.

Lloyd Arnold Petersen is buried at Fairview Cemetery in Denver, Iowa and can be located at

Lloyd was born on November 12, 1916, in Mt. Auburn, Iowa, the son of John and Anna (Passick) Petersen. He attended school and graduated from Mt. Auburn High School. In 1941, he entered the United States Army. He served in the Pacific with the 1st Medical Regiment until his honorable discharge in 1945. On October 26, 1947, Lloyd was united in marriage to Berdine Doepke. The couple made their home near Denver, and farmed until his retirement in 1989. Berdine died in March of 1995, and Lloyd continued to live on the farm until 2014, when he moved to the Denver Sunset Home.

Lloyd was a member of St. Paul’s United Church of Christ – Mt. Vernon Twp., the Acker Matthias American Legion Post #653 in Denver, and the Wayne Teisinger VFW Post #5661 in Readlyn. He enjoyed life as a farmer which included raising crops and livestock. His hobbies consisted of farm sales, gardening, square dancing, playing cards, and collecting antiques. He proudly went on the Honor Flight to Washington DC.

Funeral services will be held at 10:30 on Wednesday, December 30, 2015, at St. Paul’s U.C.C. – Mt. Vernon Twp., with Pastor Bob Ford officiating. Burial will follow at Fairview Cemetery in Denver, with Military Rites conducted by the Acker-Matthias American Legion Post #653 of Denver. Visitation will be on Tuesday, December 29, 2015 at the Kaiser-Corson Funeral Home in Denver from 4 to 7 pm. Memorials may be directed to the family for later designation. Online condolences may be left at www.kaisercorson.com. Kaiser-Corson Funeral Home in Denver is assisting the family. 319-984-5379 – See more at: http://www.kaisercorson.com/obituary/Lloyd-Arnold-Petersen/Denver-IA/1573455#sthash.iewqI7Pa.dpuf