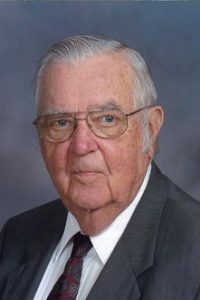 Lester Lavern Zelle entered the United States Army on February 2, 1943, in Camp Dodge, IA, served during the World War II era and reached the rank of Private First Class before being discharged on April 2, 1946 in Camp McCoy, WI.

Lester was born on March 29, 1923, on a farm West of Waverly, Iowa, the son of Arthur and Emma (Mueller) Zelle. Lester attended St. Paul’s Lutheran School and Waverly High School graduating in 1941. He attended Iowa State College in Ames, until his induction into the U.S. Army on January 26, 1943 and then at University of Idaho while in the service. While stationed at Camp Butner in North Carolina he met his future wife, V. Frances Gooch during WWII. Lester served in the European Theatre of Operation as a truck driver for a 105 mm Howitzer and gun crew with Patton’s Third Army. He returned to the states in 1946 and was discharged at Camp McCoy, Wisconsin on April 2nd of that year. Lester and Frances where married on May 26, 1946, at Bullock’s Methodist Church, Hester, North Carolina. The couple made their home in Waverly, Iowa, where Les continued his education at Wartburg College, graduating in 1948 with a degree in Mathematics and Physics. Following his graduation, he became employed by the Schield Bantam Company and was a project engineer, responsible for many of the design features found on the highly successful Bantam cranes and excavators. Lester retired January 1986. On October 7, 2001, Frances passed away and in 2015 Lester made his home at Bartels Lutheran Retirement Community.

Lester was an active member of St. Paul’s Lutheran Church, where he served on Church Council. He was also a member of the Waverly Lions Club, American Legion and V.F.W. posts, and served for twenty years on the Bremer County Selective Service Board as a member and as chairman. Lester served twenty years on the Waverly City Council, twelve years on the Waverly Electric Utility Board, and was Mayor of Waverly from 1994 through 1997. He was also active in Waverly’s Sister City program and enjoyed several trips to Eisenach, Germany where he made long lasting friendships. In 2001, Lester and Frances were honored as Grand Marshals for the Waverly Heritage Days.

Funeral services will be held on Thursday, March 28, at 10:30 a.m. at St. Paul’s Lutheran Church and School in Waverly with Pastors Larry Trachte and Sandra Burroughs officiating. Burial with military graveside rites conducted by the Waverly Area Veteran Honor Guard will be in Harlington Cemetery. Public visitation will be held on Wednesday, March 27 from 5:00 to 8:00 p.m. at the Kaiser-Corson Funeral Home in Waverly and an hour prior to services on Thursday at the church. Memorials may be directed to St. Paul’s Lutheran Schools. Online condolences for Lester’s family may be left at www.kaisercorson.com. Kaiser-Corson Funeral Home in Waverly is assisting the family. 319-352-1187.