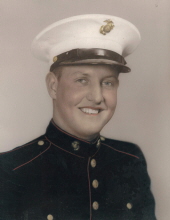 entered the United States Marine Corps on January 9, 1952, in Des Moines, IA, served during the Korean War era and reached the rank of Corporal before being discharged on January 8, 1954 in Cherry Point, NC.

is buried at St. Paul's Lutheran - Artesian Cemetery in Waverly, Iowa and can be located at

Les was born on May 25, 1929, in Bremer County, Iowa, the son of Emil and Emma (Beyer) Leisinger. He was baptized and confirmed at Trinity Lutheran in Bremer. He attended parochial school at Trinity Lutheran and then started helping his parents with farming. He also worked with his father doing carpentry work. He served in the United States Marines from 1952-1954. He was united in marriage to Velda Elaine Huebner on July 25, 1955, at St. Paul’s Lutheran Church in Readlyn. After their marriage, the couple farmed in the Waverly area and Les was a longtime seed salesman with Crow’s (later Channel Seed).

In his spare time, he enjoyed watching his children and grandchildren in their sporting events. He was an avid fan of and cheered on the Twin, Cubs, Hawkeyes and Cyclones. He loved to visit and play cards, especially Schafkopf.

Due to state and federal restrictions on gatherings due to the COVID-19 pandemic, the family will not be having a public service at this time. Private graveside services will be held at St. Paul’s Lutheran Cemetery, Artesian, rural Waverly with Pastor Larry Feldt officiating. There will be a Celebration of Lester’s life at a later date. Memorials may be directed to the family, Cedar Valley Hospice, or St. Paul’s Lutheran Church, Artesian.