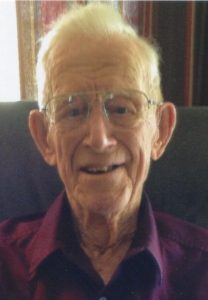 Leslie Biermann entered the United States Army on August 25, 1942, in Camp Dodge, IA, served during the World War II era and reached the rank of Technician Fifth Grade before being discharged on October 31, 1945 in Fort Knox, KY.

Leslie Biermann is buried at Faith United Church of Christ Cemetery in Tripoli, Iowa and can be located at

A Celebration of Life Service will be held 10:30 a.m., Monday, July, 31, 2017, at Faith United Church of Christ in Tripoli with Rev. Burt Williams officiating. Inurnment will follow at the Church Cemetery with military rites conducted by Brandenburg-Krueger Post #4013, V.F.W. of Tripoli. A visitation will be held from 9:30 a.m. until the service time on Monday at the Church. Memorials may be made in his name to the Cedar Valley Honor Flight, P.O. Box 182 Cedar, Falls, Iowa 50613.

Leslie, son of Fred and Martha (Drewis) Biermann was born, April 29, 1919, on the family farm near Douglas Township. He received his education in the country schools rural, Douglas Township. In 1942, Leslie enlisted in the United States Army. While serving he was involved in the Battle of the Bulge. On January 26, 1943, he was united in marriage with Lanora Bolte in Lancaster, Missouri. Leslie returned to Europe to fulfill his military duties before being honorably discharged in 1945. Following the war, Leslie and Lanora made their home in the Tripoli area. He worked as a carpenter for several years before purchasing their farm in 1957. The couple farmed for the next eleven years before moving to town in 1968. Leslie worked for Standard Oil in Tripoli before retiring in the early 1980’s. Leslie was a long time member of Faith United Church of Christ in Tripoli, where he was very active, and the V.F.W. in Tripoli. He enjoyed woodworking, but his true passion was fishing.

He was preceded in death by his wife, Lanora who died February 11, 2013; and two sisters, Irma Pleggenkuhle, and Gladys Buls.