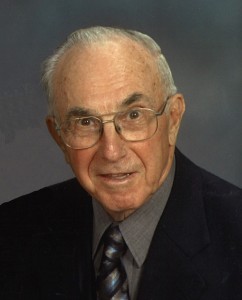 Leroy Herman Bauer entered the United States Army on January 5, 1943, in Camp Dodge, IA, served during the World War II era and reached the rank of Corporal before being discharged on October 4, 1945 in Fort Sheridan, IL.

Leroy Herman Bauer is buried at Harlington Cemetery in Waverly, Iowa and can be located at

Leroy Herman “Skeets” Bauer, 93, of Waverly, Iowa, passed away on Wednesday, September 9, 2015, at the Bartels Lutheran Retirement Community in Waverly.

Leroy H. Bauer was born on April 17, 1922, the son of Louis and Ida (Winkleman) Bauer, in Waverly, Iowa. He was baptized and later confirmed at St. Pauls Lutheran Church in Waverly, where he also attended school. On January 5, 1943, Leroy entered the United States Army Air Force, and was honorably discharged on October 4, 1945. On September 28, 1947, he was united in marriage to Gladys Daphine Strottmann, at St. Matthews Lutheran Church in Readlyn. Following their marriage, the couple farmed north of Waverly before moving into Waverly in 1968. He then was employed by Shield Bantam “Terex” until retiring in 1986. Gladys and Leroy shared 67 years of marriage, before Gladys passed away on January 23, 2015.

Funeral services will be held on Monday, September 14, 2015, at 10:00 am at St. Paul’s Lutheran Church in Waverly, with Pastor Joyce Sandberg officiating. Burial will follow in the Harlington Cemetery in Waverly, with military rites provided by the Waverly Area Veterans Honor Guard. Visitation will be held on Sunday from 4:00 pm until 6:00 pm at the Kaiser-Corson Funeral Home in Waverly, and also an hour prior to the service at the church on Monday. Memorials may be directed to Bartels Lutheran Retirement Community, Cedar Valley Hospice, or St. Pauls Lutheran Church. Online condolences for Leroy may be left at www.kaisercorson.com. Kaiser-Corson Funeral Home of Waverly is assisting the family. 319-352-1187 – See more at: http://www.kaisercorson.com/obituary/Leroy-Herman-Bauer/Waverly-IA/1542922#sthash.VkSsy5cp.dpuf