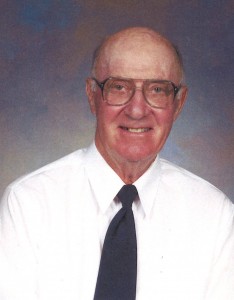 Leonard Louis Hill entered the United States Navy on February 23, 1943, in Waverly, IA, served during the World War II era and reached the rank of Fireman First Class before being discharged on December 15, 1945 in Minneapolis, MN.

Leonard Louis Hill is buried at Harlington Cemetery in Waverly, Iowa and can be located at

Leonard was born on August 6, 1923, 2 ½ miles north of Bremer, Iowa, the son of Earl S. and Edrie V. (Scott) Hill. Leonard attended the Waverly Public School System, graduating from the Waverly High School in 1941. Following his schooling, Leonard worked as a service station attendant until February of 1943, when he entered the U.S. Navy on February 23, 1943, and trained in boot camp in Farragut, Idaho. Leonard honorably served his country during WWII, and served on the USS Barb (SS-220) submarine. Leonard was honorably discharged on December 15, 1945, and following the service, Leonard returned to Waverly, Iowa. On February 23, 1947, Leonard was united in marriage to Frances White at the Little Brown Church in Nashua. The couple made their home near Waverly, and Leonard went to work for the Shield-Bantam Company (which later became Koehring Co. and now is called Terex Cranes). Leonard held many classifications with the company during his 40 years of employment and when he retired on January 1, 1986, he was the Tooling Supervisor. Also since 1950, Leonard farmed part-time near Horton, Nashua and rural Waverly.

Leonard attended Trinity United Methodist Church in Waverly. He was very proud of his time spent in the military and he was a lifetime member of the Joe W. Cretzmeyer V.F.W. Post #2208 and was a member of the American Legion Post #176. Leonard was also very active with the Submarine Vets of WWII, and enjoyed taking the replica Torpedo to many different parades around the state. He was also a member of the Bremer County Central Political Committee (Democratic Party). In his spare time, Leonard enjoyed watching the wildlife around his rural home (especially the Bald Eagles), enjoyed raising 4-H calves, was an avid hunter, and as the phrase Leonard often shared goes “Bunker Hill always worked and always will.

Celebration of Life Services will be held on Tuesday, August 25, 2015 at 10:30 a.m. at Trinity United Methodist Church in Waverly, with Pastor Deborah Coble-Wise officiating. Burial will be in Harlington Cemetery in Waverly with military graveside honors conducted by the Waverly Area Veterans Honor Guard. Public visitation will be held on Monday, August 24th from 5:00 p.m. until 8:00 p.m. at the Kaiser-Corson Funeral Home in Waverly and also for an hour prior to services on Tuesday at the church. Memorials may be directed to Cedar Valley Hospice or Trinity United Methodist Church. Online condolences for Leonard’s family may be left at www.kaisercorson.com. Kaiser-Corson Funeral Home in Waverly is assisting the family. 319-352-1187 – See more at: http://www.kaisercorson.com/obituary/Leonard-L.-Hill/Waverly-IA/1538265#sthash.iHqylZZl.dpuf