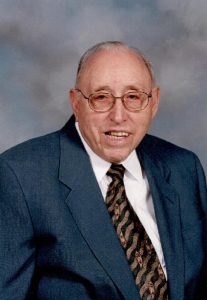 Lawrence Wayne Smith entered the United States Army on February 26, 1942, in Fort Des Moines, IA, served during the World War II era and reached the rank of Private First Class before being discharged on August 24, 1945 in Jefferson Barracks, MO.

Lawrence Wayne Smith is buried at Willow Lawn Cemetery in Plainfield, Iowa and can be located at

Lawrence Wayne Smith, the son of Arlie R. and Grace (Huggard) Smith, was born October 18, 1920 in Plainfield, Iowa. His childhood years were spent in Plainfield, Iowa, where he received his education, graduating from Plainfield High School. After his graduation, he entered the military and served with the U.S. Army during WWII from 1942 until his honorable discharge in 1945. During WWII, Lawrence was trained to be a scout in the Army. He was shipped to England on February 1943 with the fourth division and landed in France. They met the German’s 6 miles inland. He was wounded on February 26th in Germany. Lawrence was taken to the field hospital and when he was healed he came back to the company to drive for the intelligence officers until the end of the war on May 7, 1945. His Purple Heart and Bronze Star are to be buried with him. After his service to his country, he continued his schooling at Kansas City School of Watchmaking. He later moved to Waterloo, Iowa, where he served his internship at a jewelry store.

Lawrence married Georgia Collins on May 24, 1947 in Kansas City, KS. After their marriage, they moved to Reinbeck, Iowa from 1949 – 1957 and Clarksville, IA from 1957 – 1962. They moved to Spencer in 1962, where they owned and operated Smith Jewelry until his retirement in 1988. He was a member of the First Christian Church in Spencer. He was also an active member of the American Legion, VFW and the Moose Lodge. Lawrence was a longtime golfer, enjoying many years of league play on the Spencer Municipal Golf Course. They spent two winters in Arizona until Georgia’s death in 1991.

He passed away at Avera-McKennan Hospital in Sioux Falls, SD on Thursday, August 30, 2018 at the age of 97. Lawrence was preceded in death by his parents; his wife, Georgia; two brothers: Wendell and his wife, Elnora, and Glenn Smith and his wife, Margaret; one sister, Edna McNinch and her husband, Francis; and one sister-in-law, Lucille Smith.

Left to cherish his memory are his daughter, Linda Smith of Spencer; one brother, Mark of Nashua, IA; other relatives and friends.