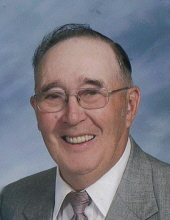 Lawrence John Steffen entered the United States Army on December 4, 1951, in Des Moines, IA, served during the Korean War era and reached the rank of Corporal before being discharged on September 10, 1953 in Camp Carson, CO.

Lawrence John Steffen is buried at St. Mary's Catholic Cemetery in Waverly, Iowa and can be located at

Lawrence was born on October 3, 1930, the son of John and Barbara (Caillard) Steffen. He was raised in rural Hardin County, Iowa, where he attended Sunnydale Country School to the eighth grade and then Ackley High School in Ackley, Iowa, graduating in 1948. In 1949, he entered the United States Army serving in Korea where he earned a Purple Heart and Bronze Star. Lawrence was united in marriage to Vanda Roever on March 2, 1957, at Sacred Heart Catholic Church in Waterloo. After their marriage, Lawrence and Vanda lived in Waterloo and later North Cedar. In 1971, they moved to Vanda’s family farm. Together they crop farmed and raised livestock for 47 years. In 2014, the family farm was honored at the Iowa State Fair as a Century Farm. Other places Lawrence worked during his life included Schultz Manufacturing in Waterloo, Calhoun Wagons, and at Viking Pump in Cedar Falls as a Pattern Designer for thirty-three years.

Lawrence was a member of St. Mary Catholic Church in Waverly and Cedar Falls American Legion. His greatest enjoyment was time spent with his family, especially his grandchildren and great-grandchildren. He was also very fond of his horses and was known to give wagon and sleigh rides to family and friends who stopped to visit. Until recently he still used his horses and a two-row planter to plant his sweet corn. Other ways he passed his time included playing 500, pinochle, dominos, collecting toy tractors and putting together puzzles.

Mass of Christian Burial will be held at 10:30 a.m. on Tuesday, March 10, 2020, at St. Mary Catholic Church in Waverly. Burial will follow at St. Mary Catholic Cemetery in Waverly with the Waverly Area Veterans Group giving honors. Visitation will be held on Monday, March 9, from 4:00 pm to 7:00 p.m. at the Kaiser-Corson Funeral Home in Waverly with a 7:00 p.m. Rosary-Scripture. There will also be an hour of visitation on Tuesday prior to the mass at the church. Memorials may be directed to the family for a later designation. Online condolences may be left at www.kaisercorson.com