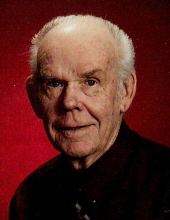 entered the United States Air Force on July 2, 1959, in Des Moines, IA, served during the Peacetime era and reached the rank of Airman Second Class before being discharged on July 1, 1963 in Rantoul, IL.

is buried at Grace Lutheran Cemetery in Tripoli, Iowa and can be located at

LaVerne was born October 8, 1941, in Tripoli, Iowa, the son of Carl and Lie Sette (Schultz) Lobeck. He was baptized October 23, 1941, at Zion Lutheran Church in Readlyn and confirmed March 25, 1956, at Grace Lutheran Church in Tripoli. He attended Tripoli High School, graduating in 1959. He served in the United States Air Force from 1959 until his honorable discharge in 1963. On August 30, 1964, he was united in marriage to Pauline Kuker at St. Paul’s Lutheran Church-Artesian. He was employed with Bantam Cranes from 1966 until his retirement in 2005. He also farmed on his own and then alongside his son later in life.

LaVerne was known to tell jokes and offer ‘one liners’ to everyone he came across. His favorite was, “See you in church if you sit by the window!”. That sense of humor helped him through two decades of medical diagnosis’ and treatment. Whether it was running for tractor parts or visiting Norby’s for supplies, LaVerne was always on the go. He enjoyed listening to Polka music and going for daily drives. Above all, he cherished time spent with his family, especially the grandchildren.

LaVerne is survived by his wife Pauline of Tripoli, a daughter, Deann (James) Daly of Bankston, Iowa and a son, Jason (Michelle) Lobeck of Tripoli, 4 grandchildren, Brianna and Natalie Lobeck and James Jr. and Madison Daly, three sisters, Karla Knight, Karen Lobeck and Jacklyn Lobeck, sisters-in-law, Karen Kuker and Marlene Kuker. He is preceded in death by his parents, and brothers-in-law, Grover Knight, Laverne Kuker and Lloyd Kuker.

Funeral Services will be held at 10:30 a.m. on Tuesday, November 12, 2019, at Grace Lutheran Church in Tripoli with Pastor Dennis Niezwaag officiating. Burial will follow in the church cemetery. Visitation will be held from 4 p.m. to 7 p.m. on Monday, November 11, at the Kaiser-Corson Funeral Home in Waverly and for an hour prior to services at the church on Tuesday. Memorials may be directed to Grace Lutheran Church in Tripoli. On-line condolences may be left at www.kaisercorson.com.