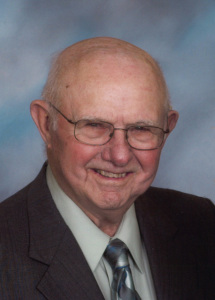 LaVern L. “Pete” Scharnhorst entered the United States Army on January 5, 1943, in Camp Dodge, IA, served during the World War II era and reached the rank of Private First Class before being discharged on January 24, 1946 in Fort Leavenworth, KS.

LaVern L. “Pete” Scharnhorst is buried at Harlington Cemetery in Waverly, Iowa and can be located at

LaVern was born on December 5, 1919, in Waverly, Iowa, the son of William and Emma (Winkelman) Scharnhorst. He was baptized on January 1, 1920 and confirmed on March 25, 1934, at St. John Lutheran Church – Western Douglas. LaVern grew up on a farm north of Waverly where he lived for 60 years, and where his son William and Kathy live now. He attended country school at Polk #3 through the 8th grade. Following his schooling he followed his Dad’s farming likes, doing custom corn shelling and milking cows, until he entered the U.S. Army on January 5, 1943, during WWII. He served for three years in New Guinea, Australia and Manila as a heavy truck driver/rifle marksman. LaVern was honorably discharged on January 26, 1946, and returned home to continue his passion of farming. On November 24, 1946, he was united in marriage to Marion Boeckmann at St. John’s Lutheran Church – Siegel. The couple remained on the farm until January of 1979, when they moved into Waverly.

LaVern was a faithful member of St. Paul’s Lutheran Church in Waverly and a lifetime member of the V.F.W. Post #2208. He was a dedicated farmer who loved his work. A Farmall “H” was his first tractor, which still runs today. In his retirement years, Pete has enjoyed camping, fishing, playing cards, visiting with friends and neighbors and spending time with his grandchildren and great grandchildren. Pete drove his pick-up truck daily to the family farm, making several trips a day. He dearly loved to ride in the Combine (watching the field monitor) and enjoyed his trips taken in the Semi. He loved driving his truck to watch the crops grow and also to check on his family which he loved and enjoyed helping them out in any way he could. Pete was a loving husband, father and grandfather.

Funeral services will be held on Saturday, October 4, 2014, at 10:00 a.m. at St. Paul’s Lutheran Church in Waverly, with Pastor Curt Schneider officiating. Burial will be in Harlington Cemetery in Waverly, with military graveside rites conducted by the Waverly Area Veterans Post Honor Guard. Public visitation will be held on Friday, October 3rd from 5:00 p.m. until 8:00 p.m. at Kaiser-Corson Funeral Home in Waverly and also for an hour prior to service on Saturday at the church. Memorials may be directed to Cedar Valley Hospice or donors choice . Online condolences for LaVern’s family may be left at www.kaisercorson.com. Kaiser-Corson Funeral Home in Waverly is assisting the family. 352-118 – See more at: http://www.kaisercorson.com/obituary/LaVern-L.-Pete-Scharnhorst/Waverly-IA/1425335#sthash.bvDfTQ3a.dpuf