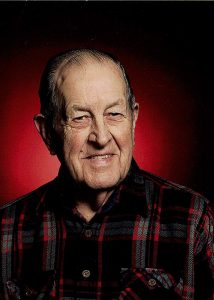 Lavern Ernest Lampe entered the United States Navy on November 3, 1942, in Des Moines, IA, served during the World War II era and reached the rank of Machinist's Mate 2/C before being discharged on October 1, 1945 in Minneapolis, MN.

Lavern Ernest Lampe is buried at Harlington in Waverly, Iowa and can be located at

Lavern was born May 22, 1921, in rural Tripoli, Bremer County, Iowa, the son of August and Clara (Schnurstein) Lampe. Lavern was baptized on June 12, 1921 at St. John’s Lutheran Church in Tripoli and later confirmed at St. John’s Lutheran Church – Maxfield, rural Denver, Iowa. Lavern graduated from the Waverly High School in 1939. Lavern enlisted in the U.S. Navy on November 2, 1942 and was honorably discharged on October 1, 1945. Lavern was united in marriage to Mildred Ruby Bartlett on May 31, 1943 and the couple made their home in Waverly. Lavern was employed by the City of Waverly for five years as the power plant operator and mechanic. Lavern then went to work at the Shield Bantam Company (now Terex) in their purchasing department until he retired in 1984. Mildred died on October 24, 1996 and Lavern continued to live in his home in Waverly.

Lavern was a member of Redeemer Lutheran Church in Waverly. Lavern was also a member of the Joe W. Cretzmeyer V.F.W. Post #2208 and the Amvets Post #79 of Waverly.

Lavern is survived by his two daughters, Claudia Lampe of Waverly, Iowa, Marianne Schuler of Omaha, Nebraska; two granddaughters, and four great grandchildren. Lavern was preceded in death by his parents, his wife, Mildred, seven brothers and one sister.

Celebration of Life Services will be held on Saturday, August 6, 2016 at 11:00 a.m. at Redeemer Lutheran Church in Waverly with Pastor Nancy Larson officiating. Burial will be held in Harlington Cemetery in Waverly with Military Graveside Rites conducted by the Waverly Area Veterans Honor Guard. Visitation will be held from 10:00 a.m. to 11:00 am on Saturday at the church. Memorials may be directed to Waverly Area Veterans Post and online condolences may be left at www.kaisercorson.com