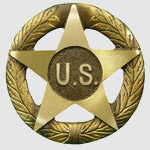 Larry W. Potratz entered the United States Army on September 7, 1961, in Fort Leonard Wood, MO, served during the Peacetime era and reached the rank of Private before being discharged on March 17, 1962 in Pueblo, CO.

Larry W. Potratz is buried at Wilson Grove Cemetery in Sumner, Iowa and can be located at