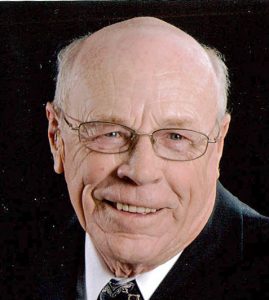 Kenneth Dale Pollock entered the United States Army on June 25, 1956, in Waterloo, IA, served during the Peacetime era and reached the rank of Specialist Third Class before being discharged on February 19, 1958 in Fort Sheridan, IL.

Kenneth Dale Pollock is buried at St. John Lutheran - Maxfield in Denver, Iowa and can be located at

Kenneth D. Pollock, 81, of Denver, Iowa passed away on Saturday, December 29, 2018 at the Cedar Valley Hospice Home in Waterloo, Iowa.

Kenneth Dale Pollock was born on April 6, 1937, the son of John Martin and Martha (Shelton) Gibbs in New Hartford, Iowa. He was adopted on August 30, 1949, by Cecil and Marie (Babbitt) Pollock. Kenny graduated from Denver High School in 1956. He was called from the Army Reserves to active duty on June 25, 1956 until his discharge on February 19, 1958. On September 14, 1958, he was united in marriage to Brenda Griese in Denver, Iowa. Kenny was employed at John Deere, retiring after 34 years. He also farmed for over 40 years in the Denver area.

Kenny was a member of St. John Lutheran Church – Maxfield, Denver American Legion, Post 653 and the PTO Club. He enjoyed fishing, tractor pulling, Iowa Hawkeye sports and social hour with friends, but most especially spending time with his grandchildren and great grandchildren.

Funeral services will be held on Thursday, January 3, 2019 at 10:30 am at St. John Lutheran Church – Maxfield, rural Denver with Pastor Corey Smith officiating. Burial will follow in the church cemetery with Military Rites conducted by the Denver American Legion, Post 653. Visitation will be held on Wednesday from 4:00 pm until 7:00 pm at the Kaiser-Corson Funeral Home in Denver, Iowa and also an hour prior the service on Thursday at the church. There will also be a Gathering at the Denver American Legion with family and friends on Thursday, January 3rd from 2:30 pm until 6:00 pm. Memorials may be directed to either St. John Lutheran Church – Maxfield, Cedar Valley Hospice or Denver Sunset Home and online condolences for Kenneth Pollock may be left at www.kaisercorson.com.

Kaiser-Corson Funeral Home of Denver, Iowa is assisting the Pollock family with arrangements. 319-984-5379