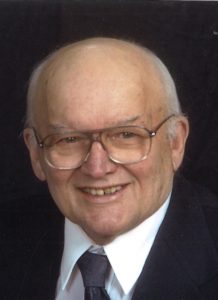 Kenneth Carl Lampe entered the United States Army on December 6, 1954, in Des Moines, IA, served during the Korean War era and reached the rank of SP3 before being discharged on December 6, 1956 in Fort Sheridan, IL.

Kenneth Carl Lampe is buried at Harlington Cemetery in Waverly, Iowa and can be located at

Kenny was born on October 13, 1929, in Waverly, Iowa, the son of Carl and Martha (Brandt) Lampe. He was baptized in Denver, Iowa, on November 3, 1929. Kenny attended St. Paul’s Lutheran School in Waverly, and was confirmed on April 11, 1943. He then attended Waverly High School graduating in May of 1947. Upon graduating from high school he started farming the family farm and farmed from that time until the present.

Ken met and then married the love of his life, LaDonna Bahlmann, on September 14, 1952 at St. John’s Lutheran Church in Frederika, Iowa. He was called to serve in the United States Army during the Korean War from 1954 to 1956. In 2014, he was able to participate in the Iowa Honor Flight to Washington, D.C.

Kenny was a faithful member of St. Paul’s Lutheran Church in Waverly until his death. He was also a member of Cedar Valley Milk Producers, where he served on the board and was named Bremer County Distinguished Milk Producer in 1988 and Farm Bureau. Kenneth loved making family videos as a hobby. He followed the Waverly–Shell Rock Go Hawks and was an avid Iowa Hawkeyes fan, however, what Kenny enjoyed most was his family, especially his grandchildren.

Visitation will be held on Friday, July 1, at Kaiser-Corson Funeral Home in Waverly where the family will greet friends from 4:00 to 7:00 p.m. Funeral services will be held at 10:30 a.m. on Saturday, July 2, at St. Paul’s Lutheran Church in Waverly with Pastor Joyce Sandberg officiating. Burial will follow at Harlington Cemetery in Waverly with Waverly Area Veterans Group giving honors. Memorials may be directed to St. Paul’s Lutheran Church or American Diabetes Association and online condolences may be left at www.kaisercorson.com. 319-352-1187