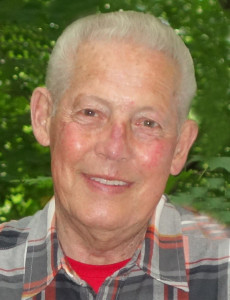 John Robert Axon entered the United States Marine Corps on June 14, 1958, in Camp Pendleton, CA, served during the Peacetime era and reached the rank of Corporal before being discharged on June 13, 1960 in Camp Lejeune, CA.

John Robert Axon is buried at Grace Lutheran Cemetery in Tripoli, IA, Iowa and can be located at

John Axon, 75, of Tripoli, Iowa passed away on Saturday, November 29, 2014 at the VA Hospital in Iowa City, Iowa following a courageous battle with cancer.

John Robert Axon was born on October 20, 1939, the son of Leonard and Marjorie (Eckhardt) Axon. He was born in Traer, Iowa, prior to moving to Tripoli, Iowa during his high school years, where he graduated in 1957. John then enlisted with the US Marines, serving from June 3, 1957 until his discharge on June 13, 1960. On May 14, 1961, he was united in marriage to Glenyce Waschkat at Grace Lutheran Church in Tripoli. John farmed in rural Tripoli until 1985. He then attended NIACC in Calmar, Iowa, where he studied to become an electrician and then started Axon Electric. He enjoyed bee keeping up and until the time of his death.

He was a member of the Farm Bureau. John enjoyed sharing his bee keeping expertise, woodworking and gardening. Most of all, John enjoyed spending time with his family, especially his grandchildren.

Funeral services will be held on Thursday, December 4, 2014 at 10:30 am at Grace Lutheran Church in Tripoli, Iowa with Pastor Scott Duffus officiating. Burial will follow at Grace Lutheran Cemetery rural Tripoli. Visitation will be held on Wednesday, December 3rd from 4:00 pm until 7:00 pm at the Kaiser-Corson Funeral Home in Waverly and also an hour prior to the service on Thursday at the church. Memorials may be directed to either the American Cancer Society or The Wounded Warriors Project and online condolences for John may be left at www.kaisercorson.com.

Kaiser-Corson Funeral Home of Waverly is assisting the family with arrangements for John Axon. 319-352-1187 – See more at: http://www.kaisercorson.com/obituary/John-Robert-Axon/Tripoli-IA/1456793#sthash.5jJeuoCW.dpuf