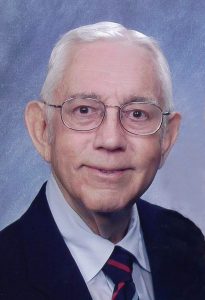 John Justis Wilhelm III entered the United States Navy on July 6, 1944, in Great Lakes, IL, served during the World War II era and reached the rank of Seaman 1st Class before being discharged on August 21, 1945 in Gulfport, MS.

John Justis Wilhelm III is buried at Harlington Cemetery in Waverly, Iowa and can be located at

On July 6, 1944, Jack enlisted in the United States Navy in Philadelphia. He did his U.S. Naval Training in Great Lakes, Illinois, attended the U.S. Naval Training School (Pre-Mat) in Chicago, Illinois and then attended the U.S. Naval Training School (EE & RM) in Gulf Port, Mississippi. Jack was honorably discharged on August 21, 1945, at Seaman First Class. Following his service, Jack returned home to Pennsylvania and on April 1, 1950, Jack began his career with the Investment Real Estate Department of Equitable Life Assurance Society of the United States. The first 17 years with Equitable were spent in Philadelphia. In 1967, he was promoted to Office Manager in Minneapolis. In the summer of 1973, Jack was transferred to St. Louis as a manager, and in the summer of 1978, transferred to San Francisco as Regional Real Estate Manager. In 1981, Jack was transferred to Los Angeles, as Regional Manager until he retired in 1985. Jack put his whole life into his Real Estate work. When living on the West Coast he would start his day at 4:00 a.m. making phone calls to the home office before they started their meetings.

On May 27, 1987, Jack was united in marriage to Iris M. Oltrogge in the Hollywood Lutheran Church, Los Angeles, California. The couple made their home in Los Angeles, San Francisco and Seattle and also had a condo in Sarasota, Florida.

In 2000, the couple moved to Waverly, making their home at the Eichhorn Haus. Iris died on December 24, 2013 and shortly after her death, Jack moved into the Bartels Lutheran Retirement Community (Woodland Terrace).

Memorials may be directed to Bartels Lutheran Retirement Community. Online condolences for Jack’s family may be left at www.kaisercorson.com. Kaiser-Corson Funeral Home in Waverly is assisting the family. 319-352-1187