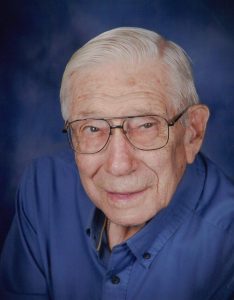 John J. Boeck entered the United States Marine Corps on June 30, 1045, in Minneapolis, MN, served during the World War II era and reached the rank of Private First Class before being discharged on July 12, 1946 in Great Lakes, IL.

John J. Boeck is buried at Oakland Cemetery in Janesville, Iowa and can be located at

John was born on May 2, 1924, in Irma, Iowa, the son of John Otto and Mervil (Adams) Boeck. He graduated from Janesville High School in 1942 and attended Wartburg College. He served in the United States Marines during World War II and was honorably discharged on July 12, 1946. He was united in marriage to Lois Klunder on August 28, 1949, at Pleasant Valley Church, rural Clarksville. He worked at John Deere in the Product Engineering Center and later drove school bus for the Janesville Schools.

John is survived by his wife, Lois Boeck of Waverly; four daughters, Barbara (Greg) Borland of Naperville, Illinois; Diane (John) Wigen of Eagan, Minnesota; Kathy (Mark) Sharp of Cedar Falls, Iowa; and Linda Boeck of Minneapolis, Minnesota; nine grandchildren and eleven great grandchildren; and a brother, O. Lewis (Beverly) Boeck of Janesville, Iowa. He was preceded in death by his parents and a great grandchild.