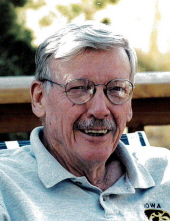 John Esau Dose, Jr. entered the United States Navy on June 19, 1944, in a place yet to be determined, served during the World War II era and reached the rank of Coxswain before being discharged on July 13, 1946 in San Pedro, CA.

John Esau Dose, Jr. is buried at St. Paul's Lutheran Cemetery in Waverly, Iowa and can be located at

Jack was born on November 21, 1925, in Keokuk, Iowa, the son of John Sr. and Ruth (McCoy) Dose. He was baptized April 30, 1933 and confirmed on April 2, 1939 at St. Paul Evangelical and Reformed Church in Keokuk. He graduated from Keokuk High School in 1944. On June 19, 1944, Jack entered the United States Navy serving during World War II. After being discharged he then attended Carthage College in Carthage, Illinois. On September 11, 1959, Jack was united in marriage to Marilyn Bradley at St. Paul’s United Church of Christ in Keokuk, Iowa. Jack and Marilyn began their married life in Keokuk where he worked as an installer with Northwestern Bell Telephone Company. They moved several times, Clinton, Indianola, and finally Waverly where he finished his 38-year career with Northwestern Bell (US West) as Regional Manager for Waverly and 10 surrounding communities. He retired in 1986.

In his early years, Jack taught Sunday School, served as church treasurer at St. Paul’s UCC in Keokuk, as church council president at St. Paul’s Lutheran Church in Clinton, as a Boy Scout leader, and as president of CWA (Communication Workers of America) on two occasions. He was a member of St. Paul’s Lutheran Church in Waverly, of the Amvets in Keokuk, Clinton and Indianola, and the Elks Club in Waterloo. Jack’s greatest enjoyment in life was time spent with his family, especially his grandchildren. He was an avid St. Louis Cardinals baseball and Iowa Hawkeye fan. He also enjoyed talking politics, golfing, cooking, and bowling.

Visitation will be held on Sunday, February 16, at Kaiser-Corson Funeral Home in Waverly from 3:00 to 5:00 p.m. A memorial service will be held at 11:00 a.m. on Monday, February 17, at St. Paul’s Lutheran Church and Schools in Waverly, with Pastor Arthur Bergren officiating. Private burial of cremains will be in the spring at St. Paul’s Cemetery in Waverly. In lieu of flowers, memorials may be directed to St. Paul’s Lutheran Church and Schools or Cedar Valley Hospice. Online condolences may be left at www.kaisercorson.com. Kaiser-Corson Funeral Home in Waverly is assisting the family with arrangements 319-352-1187.