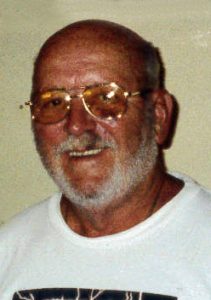 Jerome Arthur Guenther entered the United States Navy on September 11, 1957, in Des Moines, IA, served during the Vietnam War era and reached the rank of Radarman Second Class before being discharged on June 13, 1961 in USS Gallant (MSO 489).

Jerome Arthur Guenther served again in the United States Navy and reached the rank of Radarman Second Class before being discharged June 14, 1963 in Long Beach, CA.

Jerome Arthur Guenther is buried at Fairview Cemetery in Denver, Iowa and can be located at

He was born March 27, 1939, in Waverly, Iowa, the son of Gerald and Lorraine (Moeller) Guenther. He married Carolyn Black in 1963 they were later divorced. He married Sue Richards in 1979.

He graduated from Denver High in 1957, served in the US Navy from 1957 – 1963 mostly on the USS Galliant MSO 189 including stops in DaNang Vietnam. He worked at the Elks Club for 25 years, managed Willow Run Country Club in Denver, was co-owner with his wife of the Alibi Tap, and Bender Foods.

Preceded in death by his parents, a brother David, and a son Larry.

He was a member of Acker-Matthias American Legion Post 653 in Denver, NRA Life Member, and DVA.

Funeral Services will be held at 11:00 a.m. on Monday, February 18, 2019, at Saint Paul’s United Church of Christ in Denver with Rev. Craig Henderson officiating. Burial with Military Rites will be performed at the Fairview Cemetery in Denver by the Acker-Matthias American Legion Post #653. Visitation will be from 3 p.m. to 5 p.m. on Sunday, February 17, 2019, at the Kaiser-Corson Funeral Home in Denver and for an hour prior to services at the church on Monday. Memorials may be directed to the family and on-line condolences may be left at www.kaisercorson.com.