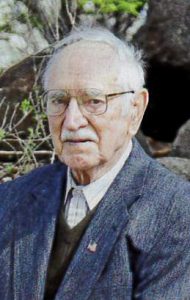 James William Miller entered the United States Navy on November 2, 1942, in Seattle, WA, served during the World War II era and reached the rank of Petty Officer Third Class before being discharged on November 9, 1945 in Alameda, CA.

James William Miller is buried at Willow Lawn Cemetery in Plainfield, Iowa and can be located at

James was born February 15, 1922, near Horton, Iowa, to Josephine and Arthur Miller. After graduating from Alpha Community High School, he attended machinists school in Milford, Iowa. He was an aviation machinists mate in the Navy during WWII serving in the South Pacific. While stationed at Navy Pier in Chicago he met Clara M. Frey and married in 1945. She passed away in 1985.

Jim farmed and worked at Oliver Company for a short time before being appointed Plainfield Postmaster – a position he held for almost three decades. As a life member of the National League of Postmasters, and State Chairman for several years, he was once honored as National Postmaster of the year. He also served on the Plainfield School Board and Plainfield Fire Department, several years as Chief. He is the last of the original members of the Bremer County Conservation Board where he served for 24 years. He always enjoyed spending time in the county parks and conservation areas they developed over the years. As a “Life Member” of the VFW, he was past Commander of Post 2208, Waverly. After retiring from the Postal Service in 1979, he and his wife did some traveling for a short time until her failing health would no longer allow it. Jim then went back to work at Koehring Corp in Waverly.

In 2002 Jim started an effort to place the Sullivan Brothers on the Iowa Commemorative Quarter issues in 2004. After compiling 28,000 signatures in favor of this, the Governor placed him on the State Selection Committee. Though it was not selected, it was one of the final five choices, and Jim felt satisfied in knowing it increased the awareness of past military sacrifices and helped to re-kindle the feeling of patriotism across the state.

Jim is preceded in death by his wife, parents, brother Martin, sisters; Harriett Nitcher and Marian Keegan. He is survived by sons; James A (Jennifer) Miller of Longmont, Colorado, Kenneth D (Carolyn) Miller of Houston, Texas, two sisters; Blanche Miller of Boston, Massachusetts and Martha (Rupert) Caballero of Waukon, and many nieces and nephews.