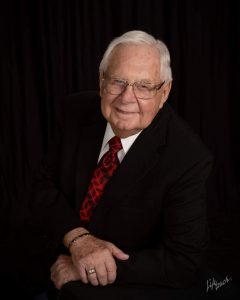 James Warren Darrah entered the United States Navy on August 31, 1950, in Mason City, IA, served during the Korean War era and reached the rank of Petty Officer Second Class before being discharged on June 1, 1954 in San Francisco, CA.

James Warren Darrah is buried at Harlington Cemetery in Waverly, Iowa and can be located at

James W. Darrah (Jim) 87, of Waverly, Iowa, passed away peacefully Thursday morning, July 12, 2018, at his residence with his family by his side.

Jim was born on September 20, 1930, in Rochester, Minnesota, the son of Clarence and Aletta (Bronner) Darrah. Jim was the first and only son of this marriage. He started school in Rochester. When he was 7 years old his parents moved to a small inland town called Maple Leaf, Iowa. He attended grade school in a one room school house 1 mile from his home. He graduated from Elma High School in 1949. On August 31, 1950, he enlisted in the U.S. Navy, where he served during the Korean War. On August 5, 1953, he was united in marriage to Zona Gale Stevens in Cresco, Iowa. Jim was honorably discharged from the Navy on June 1, 1954, in San Francisco, California. He served 18 months on the Island of Guam; and then came back to the states for Damage Control school for 4 months. On completion of his schooling he was assigned to the General J.C. Breckenridge TAP 176, where he finished his time in the Navy.

When Jim and Zona returned to Iowa, he followed in his father’s footsteps, which being a creamery manager/butter maker. He managed 3 creameries before joining The Minnesota Chemical Company in St. Paul, Minnesota. Jim was a salesman for 35 years, selling dry cleaning chemicals and equipment, and was certainly a legend in this industry. He traveled Europe learning the equipment he was selling, along with what was being manufactured here in the U.S. Jim always would tell people he loved getting up in the morning and going to work. He loved not only his work, but he loved the people he serviced over the years. On March 5, 1986, he along with co-owner Charlie Dunlap and manager Sherri Dralle (Jim’s daughter) opened Classic Cleaners on Main Street in Waverly. This was his pride and joy as he showcased it by bringing prospective dry-cleaning customers to see a working cleaning business.

In January of 1999, they sold the business to Sherri and Steve Dralle where they continued operating until the devastating fire on December 27, 2017. Jim retained his title of V.P. of Foreign Affairs (jokingly & lovingly title) until his passing as he continued to advise in decisions.

In 1998 his loving wife of 44 years, Zona, passed away. On January 23, 1999, he was united in marriage to Velda Mae (Lampe) Schaefer in Mesa, Arizona, at the Velda Rose Methodist Church. They traveled to Germany, Ireland, and many other places. Velda passed away 8 years after marriage. In 2008, Jim married Deanna W. Stuart at Trinity United Methodist Church in Waverly.
Jim was a life member of Trinity United Methodist Church and a life member of American Legion, VFW, and Amvets. He was a member of the Masonic Lodge, Eastern Star, El Kahir Shrine and Kiwanis Club of Waverly.

Celebration of Life Services will be held on Wednesday, July 18, 2018 at 10:30 a.m. at Trinity United Methodist Church in Waverly, with Pastor Carolyn Bowers officiating. The family will greet friends from 4:00 p.m. to 7:00 p.m. on Tuesday, July 17th at the Kaiser-Corson Funeral Home in Waverly, where there will be a Masonic Service at 7:00 p.m. conducted by the Waverly Tyrrell Masonic Lodge #116. Jim’s body has been cremated and will be buried in Harlington Cemetery in Waverly, with Military Graveside Rites Conducted by the Waverly Area Veterans Honor Guard. Memorials may be directed to the Waverly Area Veterans Post, Cedar Valley Hospice, or Trinity United Methodist Church. Online condolences for Jim’s family may be left at www.kaisercorson.com. Kaiser-Corson Funeral Home in Waverly is assisting the family 319-352-1187.