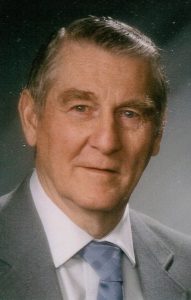 James Rollin Butler entered the United States Air Force on April 15, 1951, in Des Moines, IA, served during the Korean War era and reached the rank of before being discharged on April 15, 1955 in Great Falls, MT.

James Rollin Butler is buried at Fairview Cemetery in Denver, Iowa and can be located at

Jim was born February 18, 1930, in Oelwein, Iowa, the son of Rollin and Vernie (Valentine) Butler. He graduated from Oelwein High School in 1949 and then attended Upper Iowa University in Fayette, Iowa. Jim served in the United States Air Force from 1951 until his honorable discharge in 1955. On March 15, 1952, he was united in marriage to Marilyn Lee Walters at the Little Brown Church in Nashua, Iowa. Jim worked for the Great Western Railroad, Illinois Central Railroad, and retired from John Deere after 25 years of service on April 30, 1992.

Jim was a longtime member of Saint Paul United Church of Christ in Denver, American Legion Post #653 of Denver, and UAW 838. In his free time he enjoyed golfing, bowling, bicycling, fishing and camping. He was an avid fan of the Iowa Hawkeyes and Chicago Cubs.
Jim is survived by his wife, Marilyn of Denver, three daughters; Julie (Craig) Mortimer of Waterloo, Iowa, Janet (Larry) Wente of Whitehouse, Texas and Linda (Craig) Decker of Winthrop, two sons; Michael (Susan) Butler of Grimes, Iowa and John Butler of Cedar Falls, 17 grandchildren and 10 great grandchildren, sister; Doris Halstead of Charles City. He is preceded in death by his parents, granddaughter; Jennifer Wente, twin grandsons; Jeremy and Joshua Decker, and sister Norma Lubbs.

Funeral Services will be held at 10:00 a.m. on Tuesday, September 6, 2016, at Saint Paul United Church of Christ in Denver with Rev. Craig Henderson officiating. Burial will follow in the Fairview Cemetery in Denver with Military Rites by Acker-Matthias American Legion Post #653. Visitation will be from 5 p.m. to 8 p.m. on Monday, September 5, 2016, at the Kaiser-Corson Funeral Home in Denver and for an hour prior to services at the church on Tuesday. Memorials may be directed to the family and on-line condolences may be left at www.kaisercorson.com.