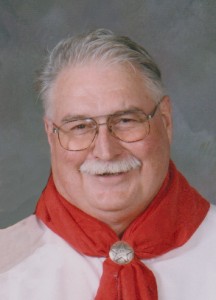 James Justin Acton entered the United States Air Force on September 9, 1958, in Des Moines, IA, served during the Vietnam War era and reached the rank of Airman First Class before being discharged on August 2, 1962 in Travis Air Force Base, CA.

James Justin Acton is buried at in , Iowa and can be located at

Jim was born June 6, 1940, in Ottumwa, Iowa, the son of John and Dorothy (Snelling) Acton. He graduated from Ottumwa High School in 1958 and then immediately entered the United States Air Force. He received specialized training while in the Air Force at Yale University where he studied the intricacies of the Chinese language. This training led Jim to become a linguist in the early years of the Vietnam War. He was honorably discharged from the Air Force in 1962. On June 1, 1968, he was united in marriage to Karen Ann Hawkins in Camanche, Iowa. He attended the University of Northern Iowa where he received his B.A. in History in 1970 and M.A. in Library Science in 1971. Jim started working as a Media Specialist at Holmes Junior High in Cedar Falls in 1971; a job he held until his retirement in 2001.

Jim had a passion for caring for his forest and surrounding land. He enjoyed reading, reenacting the Revolutionary War and fur trade, being a founding member of Turkeyfoot Longrifles in Cedar Falls and watching westerns. He was a longtime member of the Acker-Matthias American Legion Post #653 in Denver. Alongside Karen, he volunteered for Green Scene of Black Hawk County.

Jim is survived by his wife, Karen of Denver,
daughter, Julia Acton of St. Paul, Minnesota, and a brother, John (Carol) Acton of Denver, Colorado. He is preceded in death by his parents, Dorothy and John.

A Memorial Visitation will be held from 2 p.m. to 5 p.m. on Saturday, August 29, 2015, at the Kaiser-Corson Funeral Home in Denver. A private family service will be held at a later date. Memorials may be directed to the Acker-Matthias American Legion Post # 653 in Denver. On-line condolences may be left at www.kaisercorson.com.

Kaiser-Corson Funeral Home in Denver is in charge of arrangements. 319-984-5379 – See more at: http://www.kaisercorson.com/obituary/James-Justin-Acton/Denver-IA/1539218#sthash.eqHyAxqt.dpuf