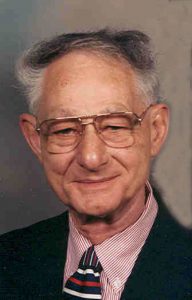 James Julius Lamos entered the United States Army on , in , served during the Korean War era and reached the rank of before being discharged on in .

James Julius Lamos is buried at St. Peter's Lutheran Cemetery in Denver, Iowa and can be located at

Jim was born on December 18, 1931, the son of Julius W. and Evelyn A. Hilton Lamos in LaPorte City, Iowa. He was baptized on June 12, 1932, at the United Methodist Church in LaPorte City and confirmed as an adult on August 12, 1962, at Redeemer Lutheran Church in Washburn, Iowa. After his schooling, Jim entered the United States Army on December 28, 1948. He was honorably discharged on May 27, 1952. After returning home, Jim re-enlisted on February 3, 1954, and was honorably discharged on April 7, 1955. He returned home to LaPorte City after his distinguished military career. On May 10, 1958, he was united in marriage to Nancy Kretzschmar in McGregor, Iowa. The couple made their home in Washburn until moving to Denver in 1969. Jim worked at Rath Packing and John Deere for a short time until he became employed at Chamberlin Manufacturing in Waterloo, Iowa, in 1966. He retired from Chamberlin in 1994.

Jim was a member of St. Peter Lutheran Church in Denver, Acker Matthias American Legion Post #653, and a lifetime member of the National Rifle Association. He served many youth through his involvement as a scout master and as an instructor for the Junior Rifle Club. Jim loved the outdoors and spent much of his time fishing and camping. His favorite place to camp was the Black Hills, South Dakota, where he owned a cabin for a few years while his children were growing up. Jim also loved trains, military history, and spending time with his grandchildren.

Jim is survived by his wife, Nancy of Denver; three sons and their spouse, Robert & Wendy Lamos of Waverly, Iowa, Barry & Wendy Lamos of Hampton, Iowa, and Bryan & Linda Lamos of Leavenworth, Washington; one daughter and her spouse, Marcia & Bret Lashbrook of Waverly, Iowa; eleven grandchildren; one brother, John Lamos of Desert Hot Springs, California; one sister, Virginia Lamphier of Fayette, Iowa; and one aunt, Annie Geater of LaPorte City, Iowa. He was preceded in death by his parents; one brother, Robert Lamos; and two sisters, Helen Brown and Marcella Payne.

Funeral services will be held at 10:30 am on Friday, October 20, 2006, at St. Peter Lutheran Church in Denver. Burial will be in the church cemetery with military graveside rites conducted by Acker-Matthias American Legion Post #653 of Denver. Visitation will be held from 4:00 pm until 8:00 pm on Thursday at Kaiser-Corson Funeral Home in Denver. Memorials may be directed to St. Peter Lutheran Church, Cedar Valley Hospice at 207 20th St. N.W. Waverly, Iowa, or Acker-Matthias American Legion Post #653. Condolences may be left at kaisercorson.com.