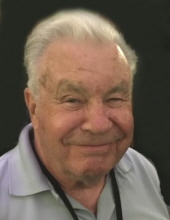 James Earl Wheeler entered the United States Army on November 4, 1952, in Des Moines, IA, served during the Korean War era and reached the rank of Corporal before being discharged on August 25, 1954 in Camp Carson, CO.

James Earl Wheeler is buried at Harlington Cemetery in Waverly, Iowa and can be located at

Jim was born June 26, 1932, in New Hampton, Iowa, the son of Clarence and Jennie (Hill) Wheeler. He attended school in New Hampton for several years before moving to Waverly. He graduated from Waverly High School with the class of 1950. He then entered the United States Army and served in the Korean War. Upon his honorable discharge, he returned to Waverly where he would work for the Waverly Street Department. In 1966 he began working for Carnation and continued there for 30 years, retiring in 1996. On July 29, 1971, he was united in marriage to Karen Hoeper at St. Paul’s Lutheran Church in Waverly. The couple made their home in Waverly and enjoyed traveling throughout the area to casinos. Karen passed away March 18, 2015.

Jim was very proud of his service in the Army and enjoyed time spent among his friends at the Waverly Area Veterans Post. He was a lifetime member of both the Waverly AMVETS and VFW. He was a volunteer firefighter for the Waverly Fire Department for 19 years. He loved to gamble, especially at Tama and to Mystic Lake to celebrate their anniversary. Over the past five years he enjoyed taking many trips with his son, Jason.

Jim is survived by his son, Jason Wheeler of Waverly, brothers-in-law, Eugene and Eldon Hoeper and several cousins. He is preceded in death by his parents, his wife Karen and a daughter in infancy, Nicole Lynn Wheeler in 1974.

Funeral Services will be held at 10:30 a.m. on Saturday, March 7, 2020, at St. Paul’s Lutheran Church and School in Waverly with Pastor Arthur Bergren officiating. Burial will follow in the Harlington Cemetery in Waverly. Visitation will be from 4 p.m. to 7 p.m. on Friday, March 6, 2020, at the Kaiser-Corson Funeral Home in Waverly and for an hour prior to services at the church on Saturday. Memorials may be directed to the family and on-line condolences may be left at www.kaisercorson.com.