James C. Miller entered the Infantry on December 30, 1863, in Roclford [sic], served during the Civil War era and reached the rank of Private before being discharged on February 18, 1865 in Vicksburg, MS.

James C. Miller is buried at Harlington in Vicksburg, Iowa and can be located at

Buried in National Cemeter at Vicksburg Miss bur a memorial erected at Waverly Ia. died at Vicksburn 2-18-65
Married Catherine Jane Lanning of Seneca Kake NY at Rockford Ill. in 1865 after the death of her husband. Mrs Miller ca[m] to W[a]verly Ial in 1865 with her 6 chidren. She died July 22 1903 at the age of 83 years. Buria in Harlington Ceme[ter]y Waverly Ia. She was born June 27 1820.

We also give a letter written to the afflicted family by a comrade in his Regiment:

Dear Sister Miller – Although a stranger, I have written to you on former occasions over the signature of your husband, and now it becomes my duty to again write to you, but without that signature that has so often pleased your eye and cheered your heart. It has often been my lot, with a heart that feels for others’ woes and eyes that drop the tear of sympathy, to offer comfort and consolation to wounded hearts that suffer under the rod of affliction. Oft, on the march, our comrades have fallen by the ruthless hand of death and we have deposited their remains on the plantations of Tennessee, among the hills of Mississippi, on the plains of Louisiana and in the wilderness of Arkansas, we have laid them away upon the mountain top, and in the lonely vale, on the levee of the Mississippi, and in the sequestered grove, a few in the retired cemetery, and upon the contested fields of strife and blood we have deposited from a dozen to two score in one common grave, and then retire to our tent or perhaps to our knapsack in the open field to convey with pen and ink the sad intelligence to the homes of their loved ones. And oh, when we can point them forward to a glorious resurrection and an immortality beyond the grave where kindred spirits shall be re-united, and where the commotions of war will never sunder those bonds of love, our task is measurably lightened of its burden.

Last Fall while on detached service your husband, James Miller, and myself were thrown into each other’s society and we spent many pleasant social hours together, which you have seen by former letters. We were again separated and seldom met until coming down the river, but a few days ago on the crowded steamboat, I saw him on guard duty, I stopped a few moments to talk with him, the conversation turned on the subject of morality and we did not at that time broach the subject of religion. I next saw him after we had landed at Vicksburg, as I was passing through the cabin I saw him lying on his cot, said I ‘Uncle Miller, is that you?’ ‘Oh, yes,’ said he, ‘I am very sick,’ and in further conversation he exclaimed, ‘Glory to God, Christ has forgiven all my sins,’ and then informed me that under the efficient labors of our beloved Chaplain on New Years day the convicting spirit of God wrought upon him and seeing his undone condition he retired for prayer and now he was a new man, he was happy in his Savior’s love and rejoicing in a full salvation. I promised to call and see him again, but we marched out into the country and he was removed to the hospital and I saw him no more. Last night I received intelligence that James Miller was dead.

And now, my dear afflicted friend, you mourn not as one having no hope. Oh, realize that it is your Father’s hand that holds the afflicting rod, and the chastening is grevious, yet it is in love, and oh be assured that He is too wise to err and too good to be unkind and that He does not afflict willingly nor grieve the children of men. Oh, dear sister look to Him who has promised to be the widow’s God and the orphan’s Father, who has promised to stand by you in six troubles and not to forsake you even in the seventh, and has said his grace is sufficient for you.

Mr. Miller has, in social conversation, told me of his family and of the affectionate regard in which he esteemed them, of the religious character of his wife (of his children I do not recollect so well) which causes me to anticipate the time when I shall see James and Catharine Miller arm in arm walking the golden pavements of the Eternal City beneath the shade of the Tree of Life and partaking of the rich clusters of its embrosial fruit, and drinking of the River of Life which flows from beneath the throne, and I trust too that I shall see the children following in the trail and hear them sing as one unbroken family the song of redeeming grace and love unto Him who hath washed and redeemed them with his own blood and made them mete to become heirs of eternal life. Please accept the above from your sincere friend and brother in Christ 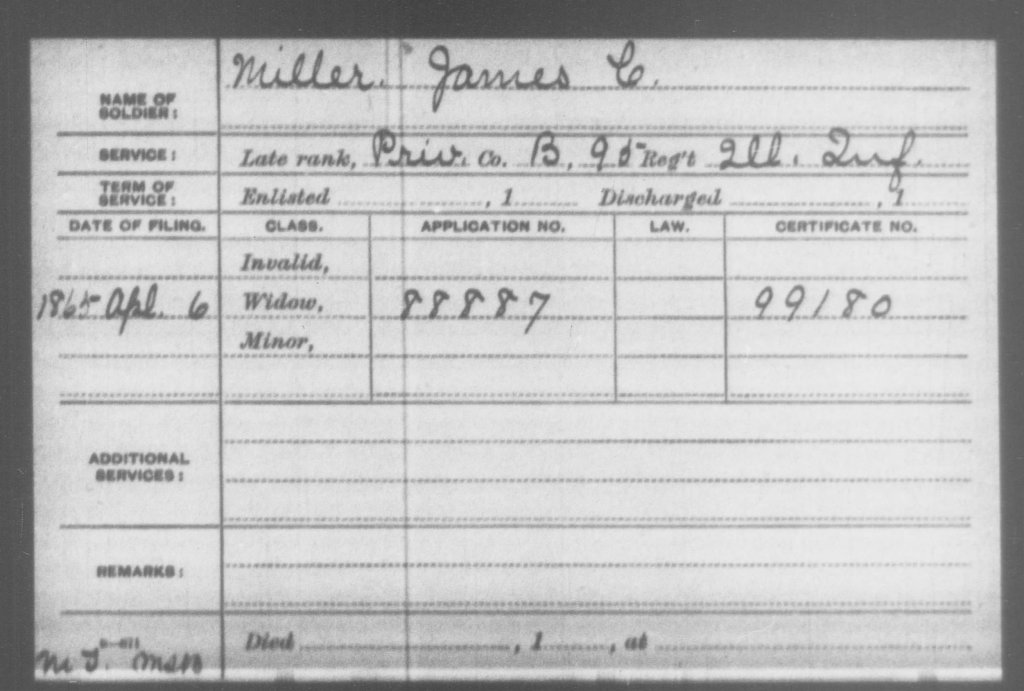