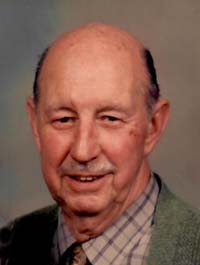 James Albert Jermier entered the United States Army on January 22, 1943, in Camp Dodge, IA, served during the World War II era and reached the rank of before being discharged on December 27, 1945 in Camp Dodge, IA.

James Albert Jermier is buried at Horton Cemetery in Horton, Iowa and can be located at

James A. “Jerry” Jermier, 93, passed away peacefully Thursday, July 27, 2017, at Spurgeon Manor in Dallas Center. Cremation rites have been accorded and a memorial service will be held 10 a.m. Wednesday, August 9, at Iles-Brandt Chapel in Dallas Center. Private inurnment will be held at the Horton Cemetery in Horton, Iowa at a later date.

Jim was born on December 21, 1923, on his grandfather’s farm near Waverly, Iowa, to Bert Thomas and Orpha Jean (Seely) Jermier. He graduated from Nashua High School. Jim served in the US Army from January 1943 – December 1945, including participating in the Battle of the Bulge in 1944. Upon his return home in 1945 he met Bonnie G. Smith and they were married June 9, 1946, in Osage, Iowa. Jim attended Wartburg College and transferred to Iowa State University College of Veterinary Medicine, graduating in 1952.

Jim worked for Dappen and Barclay Veterinary practice from 1955 – 1957 in Brooklyn, Iowa. He returned to Iowa State University to teach veterinary anatomy from 1957 – 1961. Dr. Barclay asked Jim to return to Brooklyn to become a partner in the practice where he continued his practice with Dr. Homer Hamby until 1973. Following his retirement Jim and Bonnie operated Jermier Variety Store in Brooklyn until 1986. They moved to their “hobby farm” near Deep River, Iowa for 22 years. In his final years he moved to Dallas Center, Iowa to be closer to his family.

Jim is survived by his wife of 71 years, Bonnie, his sons, Stevan Jermier and David (Brenda) Jermier, both of Dallas Center; grandchildren, Matt (Katie) Jermier of Waukee and Julie (Chris) Watson of Littleton, CO, granddaughter-in-law, Cali Jermier of Grimes, his great grandchildren Bryce, Ellie, Macey, Kale and Madden Jermier and Tyson, Jalen, and Quentin Watson; and two foreign exchange students, Robert Jansson of Sweden and Eliatan Machado of Brazil. He was preceded in death by his parents, grandson, Chris Jermier, and his siblings, Jack Jermier and Jean Ellery.

In lieu of flowers, memorial contributions may be made to Grace United Methodist Church in Brooklyn, Iowa. Online condolences will be welcomed at IlesCares.com.

To send flowers or a remembrance gift to the family of James A. Jermier, DVM, please visit our Tribute Store.