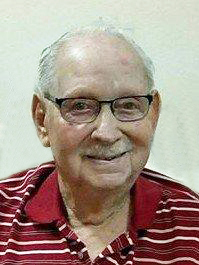 Jack Charles Smith entered the United States Army on February 16, 1943, in Camp Dodge, IA, served during the World War II era and reached the rank of Technician Fifth Grade before being discharged on November 22, 1945 in Fort Logan, CO.

Jack Charles Smith is buried at Willow Lawn Cemetery in Plainfield, Iowa and can be located at

Jack was born April 21, 1924, in Rosewood, Oregon, the son of Harold and Minnie (Madouse) Smith. He served his country in the United States Army from 1943 until his honorable discharge in 1945. He returned to Plainfield and bought a can milk route and managed that route until 1958. On October 31, 1948, he was united in marriage to Rita Krunig at the Little Brown Church in Nashua. In 1959, he went to auction school and started Jack’s Auction Service. On March 19, 1961, he was baptized, along with his son Steve, at the Methodist Church in Plainfield. Jack also worked at Chamberlain Manufacturing, retiring in 1986. Rita passed away in 2000 and Jack continued to live in Plainfield until becoming a resident of Bartels in 2014.

Jack was known for his sense of humor-he loved to laugh. Spending time with family was always an important part of his life. He enjoyed time at the river and wintering in Texas for nearly 20 years. Going to casino’s and playing cards, especially 500, were a couple of his favorite things to do.

Funeral services will be held at 10:30 a.m. on Tuesday, March 15th, 2016, at the Bartels Lutheran Retirement Community in Waverly with Pastor Al Bidne officiating. Burial will follow in the Willow Lawn Cemetery in Plainfield. Visitation will be held from 5 p.m. to 8 p.m. on Monday, March 14, at the Kaiser-Corson Funeral Home in Waverly and for an hour prior to the service on Tuesday. Memorials may be directed to the family and on-line condolences may be left at www.kaisercorson.com.

Kaiser-Corson Funeral Home in Waverly is in charge of arrangements. 319-352-1187 – See more at: http://www.kaisercorson.com/obituary/Jack-Charles-Smith/Plainfield-IA/1597958#sthash.4BHssFJy.dpuf