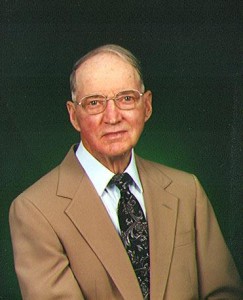 Ivan G. Epley entered the United States Army on December 25, 1941, in Des Moines, IA, served during the World War II era and reached the rank of Captain before being discharged on March 28, 1946 in Fort Sheridan, IL.

Ivan G. Epley is buried at Warren Cemetery in Waverly, IA, Iowa and can be located at

Ivan was born on February 8, 1919, the son of Arthur C. and Lydia (Raecker) Epley. He attended school in Waverly, graduating from Waverly High School in 1937. He then attended Iowa State College from 1939-1940. Following college, Ivan served as an officer in the Army during World War II. He returned home after being honorably discharged and began farming the family farm. On May 16, 1948, Ivan was united in marriage to Evelyn Dreier at St. Paul’s Evangelical and Reformed Church in Denver. Ivan and his wife farmed at the Epley homestead until 1992. They and their sons had formed a family farm corporation in 1974, and in 1992, Ivan and Evelyn moved to one of the smaller farms and retired gradually from the Ace Farm operation.

Ivan was an active member of the Warren United Methodist Church for many years and then was a charter member of the Open Bible Church in Waverly. He was also a member of Farm Bureau, where he was a past county president, an active member of the Sound of Joy singing group, a past National Director for the EUB men’s group, member of the Bremer County Dairy Promoters, where he served on the board, and he was a 4-H Leader for 31 years for the Townline Cowboys. He enjoyed farming, fishing, pitching horseshoes, and especially spending time with his family and friends.

Ivan is survived by two sons, Dennis Epley and Bruce (Kathy) Epley all of Waverly; six grandchildren, Katrell of Davenport, Adam of Placentia, California, Zachary of Cedar Falls, Hannah of Chicago, Samuel and Jacob both of Waverly; two brothers, Perry Epley of Payson, Arizona; Lloyd (Donna) Epley of Coralville; and by one sister, Florence Lundberg of Pilot Mound, Iowa. He was preceded in death by his parents, his wife Evelyn on June 26, 2005; and by one brother, Milton Epley.

Funeral services will be held on Saturday, November 12, 2005, at 10:30 a.m. at the Waverly Open Bible Church with Pastors Bill Burchit and Marvin Talamantez officiating. Burial will be in the Warren Evangelical Cemetery, Waverly. Visitation will be held on Friday from 6:00 P.M. to 9:00 P.M. at the Kaiser-Corson Funeral Home in Waverly, and also for an hour prior to services Wednesday at the church. Memorials may be directed to the Waverly Open Bible Church or to Cedar Valley Hospice. Condolences may be left at www.kaisercorson.com. – See more at: http://www.kaisercorson.com/obituary/Ivan-G.-Epley/Waverly-IA/264117#sthash.R7mSzmq6.dpuf