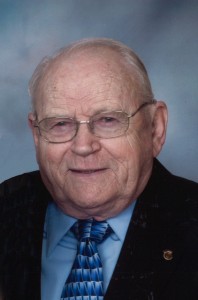 Hubert Harlan Barber entered the United States Army on November 17, 1950, in Des Moines, IA, served during the Korean War era and reached the rank of Private First Class before being discharged on November 14, 1952 in Carson, CO.

Hubert Harlan Barber is buried at Harlington Cemetery in Waverly, Iowa and can be located at

Hubert H. Barber, 86, of Waverly, Iowa passed away on Friday, June 26, 2015 at the Cedar Valley Hospice Home in Waterloo, Iowa.

Hubert Harlan Barber was born on October 29, 1928, the son of Charles and Mabel (Reasnor) Barber in Waverly, Iowa. He was baptized on March 31, 1929 at the United Methodist Church in Waverly. Hubert graduated from Waverly High School in May of 1946. He was confirmed as an adult at St. Paul’s Lutheran Church in 1950. On November 17, 1950, he entered the Army serving during the Korean War, until his discharge on November 14, 1952 at which time he transferred to ERC for 5 years. He graduated from Iowa Barber College in 1953. On August 16, 1953, he was united in marriage to Maxine Ann Graening at St. Paul’s Lutheran Church in Waverly. He was self-employed as a barber from July of 1953 until August of 1965, at which time, he was employed at the Waverly Post Office until his retirement on December 31, 1989.

He was a member of St. Paul’s Lutheran Church in Waverly, American Legion, where he was a Past Commander, VFW and Waterloo Ostomy Chapter. Hubert was Adjutant of American Legion for numerous years, arranged funeral detail, parade detail and football game detail from 1995 until 2006. Past President of Double or Nothing Club at St. Paul’s Lutheran Church. He enjoyed fishing, woodworking, playing cards, but most especially spending time with his family. He was always known as “Grandpa teaser” to his family.

Funeral services will be held on Wednesday at 10:30 am at St. Paul’s Lutheran Church in Waverly with Pastor Curt Schneider officiating. Burial will follow in the Harlington Cemetery in Waverly with military rites conducted by the Waverly Area Veterans Group. Visitation will be held on Tuesday from 4:00 pm until 8:00 pm at the Kaiser-Corson Funeral Home in Waverly and also an hour prior to the service at the church on Wednesday. Memorials may be directed to St. Paul’s Lutheran Church or Cedar Valley Hospice of Waverly and online condolences for Hubert may be left at www.kaisercorson.com.

Kaiser-Corson Funeral Home of Waverly is in charge of services for Hubert H. Barber. 319-352-1187 – See more at: http://www.kaisercorson.com/obituary/Hubert-Harlan-Barber/Waverly-IA/1522501#sthash.y8SRajZr.dpuf