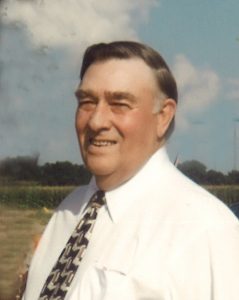 Hubert Bruce “Huey” Hoins, 81, of Waverly, Iowa, died peacefully at his home on Tuesday morning, April 19, 2016, from complications of cancer.

Hubert was born on March 30, 1935, on a farm southwest of Deshler, Nebraska, the son of Albert George and Frieda Doretta (Ahrens) Hoins. Hubert was baptized on April 14, 1935 at St. Marks Evangelical Lutheran Church in Ruskin, Nebraska and was confirmed on June 27, 1948, at Missouri Synod Lutheran Church in Davenport, Nebraska. Hubert attended grade school at Nuckolls County District #23 through the 8th grade and graduated in 1952 from the Ruskin High School. On August 5, 1953, Hubert entered the United States Army during the Korean War and did his basic training in Fort Riley, Kansas. Hubert did a tour of duty in Germany, where he served as a General Supply Specialist until his honorable discharge on July 20, 1956. Hubert returned home and on August 19, 1956, he was united in marriage to Donna Lou Fangmeyer at St. John’s Lutheran Church in Byron, Nebraska. Hubert worked on a Dairy farm north of Bristow, Iowa from 1956 – 1958 and then moved back to Stoddard, Nebraska, to farm with his father-in-law, Richard Fangmeyer. In May of 1960, he rented a farm northeast of Friedensau, Nebraska, which is located along the Oregon Trail. In March of 1967, the couple moved to the Bergt Farm northwest of Deshler and on February 21, 1969, had a farm sale and moved to the Iserman farm, east of Horton, Iowa. In December of 1983, the family moved into their new home 1 mile east of Horton where he continued to farm with R & M Farms until he retired.

Hubert was a member of St. Paul’s Lutheran Church – Artesian. In his spare time, Hubert enjoyed woodworking, card playing, but most of all he loved being with family and friends.

Funeral services will be held on Friday, April 22, 2016, at 11:00 a.m. at St. Paul’s Lutheran Church – Artesian, rural Waverly, with Pastor Keith Brustuen officiating. Burial will be in the church cemetery, with military graveside rites conducted by the Waverly Area Veterans Post Honor Guard. Public visitation will be held on Thursday, April 21st from 4:00 p.m. until 7:00 p.m. at the Kaiser-Corson Funeral Home in Waverly and also for one hour prior to services on Friday at the church. Memorials may be directed to Cedar Valley Hospice – Waverly office, St. Paul’s Lutheran Church – Artesian or Valley Lutheran School in Cedar Falls. Online condolences for Hubert’s family may be left at www.kaisercorson.com. Kaiser-Corson Funeral Home in Waverly is assisting the family. 352-1187