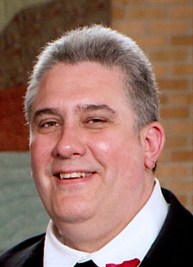 Howard Lee Buchholz entered the United States Army on September 11, 1979, in Des Moines, IA, served during the Peacetime era and reached the rank of before being discharged on February 25, 1988 in Fort Dix, NJ.

Howard Lee Buchholz is buried at Harlington Cemetery in Waverly, Iowa and can be located at

Memorial services for Howard Buchholz will be held 11 a.m. Saturday, December 13, 2014, at Messiah Lutheran Church. Pastor Jane Keel will officiate. Inurnment will be at a later date.

The family will greet friends Saturday from 9 a.m. until service time.

Howard Lee Buchholz was born August 30, 1961, at Fort Belvoir, Virginia, the son of Elmer and Judith (Schwerin) Buchholz, Jr. He graduated from Charles City High School and from North Iowa Area Community College. Howard proudly served in the United States Army for eight years. On May 24, 1981, he married Teresa Ringwald. They later divorced. For many years Howard was employed at Curries Company in Mason City. His interests included riding his Harley, attending rock concerts and playing computer games.

He was preceded in death by his grandparents.