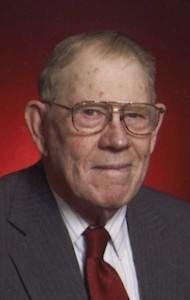 Howard Glendon Parmer entered the United States Army on April 8, 1941, in Fort Des Moines, IA, served during the World War II era and reached the rank of Corporal before being discharged on August 24, 1945 in Camp Chaffee, AR.

Howard Glendon Parmer is buried at Harlington Cemetery in Waverly, Iowa and can be located at

Howard was born on June 18, 1919, in Decatur County, Iowa, the son of Elijah and Della (Sissel) Parmer. He was raised in the Decatur County area and graduated from Decatur High School in 1937. In 1941, Howard was drafted into the United States Army during WWII, where he was captured in North Africa and held as a prisoner of War in Germany from 1943 to 1945. He was honorably discharged in 1945. On July 10, 1948, Howard was united in marriage to Sylvia Smith at the Evangelical United Brethren Church in Waverly. Howard farmed in the Shell Rock area for most of his life and also worked as a custodian at the Waverly-Shell Rock School System for eight years.

Howard was a member of Heritage United Methodist Church. He enjoyed gardening, woodworking, fishing, reading, traveling, and embroidery, however, what he enjoyed most was spending time with his family.

Visitation will be held on Sunday, April 5, at Kaiser-Corson Funeral Home in Waverly where the family will greet friends from 5 to 7 p.m. Funeral services will be held at 11:00 a.m. on Monday, April 6, at Heritage United Methodist Church in Waverly. Burial will follow at Harlington Cemetery in Waverly with the Waverly Area Veterans Group giving honors. Memorials may be directed to Howard’s family to be distributed to area organizations. Online condolences may be left at www.kaisercorson.com.
319-352-1187