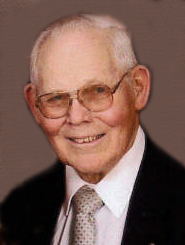 Herman Henry Emkes entered the United States Army on May 5, 1954, in Des Moines, IA, served during the Korean War era and reached the rank of SP3 before being discharged on May 3, 1957 in Fort Knox, KY.

Herman Henry Emkes is buried at St. Peter Lutheran Cemetery in Denver, Iowa and can be located at

Herman was born February 3, 1932, on the family farm in Grundy County, Iowa, the son of Anton and Jennie (Hempen) Emkes. He attended school through the 8th grade and then began working alongside his father on the farm. He served his country in the United States Army during the Korean War until his honorable discharge in 1957. On December 22, 1958, he was united in marriage to LaVonne (Meier) in Sutton, Nebraska. Together they would build, own, and operate the mobile home park south of Denver for over 40 years, during which they were members of the Manufacturing Housing Association. They also owned the laundromat in Denver for many years. Herman had various trucking jobs over the years, most notably with Schumacher Elevator Company in Denver for which he drove over 25 years and Warren Transport in Waterloo for over 15 years. On May 15, 2016, while a resident of The Meadows in Shell Rock, Herman was presented with an honorary high school diploma issued by the Iowa Veteran Administration.

Herman was a longtime member of St. Peter Lutheran Church in Denver. He was a 40+ year member of the American Legion Post in Denver where he served as Post Commander, Membership Chair and numerous other positions. He served as the 3rd District Vice-Commander of the American Legion. Herman was very involved with the Boy Scouts of America where he served as scout master for over 10 years and earned several awards including Silver Beaver Award, The Lamb Award, Order of Arrow, Wood Badge and the Scouting Lifetime Achievement Award. He and LaVonne were members of the Ostfriesen Heritage Society and longtime active members of the Denver Starduster square dance club.

Herman was the proud owner of a 1951 Kaiser-Fraiser and was a member of KFOCI. He modified several tractors and created implement replicas, fit with moving parts and accurate detail. He also belonged to the local PTOS (Preserving The Old Stuff) tractor club. Herman and LaVonne traveled around the world; he was very proud of the work accomplished while on a mission trip to New Life School in Guatemala. His newest project, a Civil War Memorial at the American Legion Post in Denver, was very important to him and will be carried out posthumously.

Funeral services will be held at 10:30 a.m. on Wednesday, August 10, 2016, at St. Peter Lutheran Church in Denver with Pastor Ron Mathews officiating. Military Rites will be conducted at St. Peter Lutheran Cemetery by Acker-Matthias American Legion Post #653 of Denver. Visitation will be held from 4:00 p.m. to 7:00 p.m. on Tuesday, August 9, at the Kaiser-Corson Funeral Home in Denver and an hour prior to services Wednesday at the church. Memorials may be directed to Acker-Matthias American Legion Post #653 of Denver or St. Peter Lutheran Church of Denver (for the church or mission partner New Life School in Guatemala). Online condolences may be left for the family at www.kaisercorson.com.