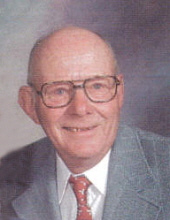 Henry Junior Lobeck entered the United States Army on January 30, 1951, in Des Moines, IA, served during the Korean War era and reached the rank of Sergeant before being discharged on January 29, 1954 in Fort Eustis, VA.

Henry Junior Lobeck is buried at St. John's Lutheran Cemetery in Sumner, Iowa and can be located at

Henry Junior “Bud” Lobeck, 88, of Waterloo, Iowa, passed away on September 19, 2019, at the Rosewood Estates in Waterloo.

Henry was born on December 27, 1930 in Readlyn, Iowa, the son of Henry and Wilhelmina (Stumme) Lobeck. He was baptized on January 25, 1931 and confirmed on March 25, 1945, both at Zion Lutheran Church in Readlyn. After his schooling, Henry farmed in the area, prior to entering the service. He entered the Korean War in 1951 and was honorably discharged on January 29, 1954. He was united in marriage to Laura Mae Buhr on August 28, 1955, at St. John’s Evangelical Lutheran Church in Sumner. Henry was a longtime carpenter and later owned Black Hawk Plastics in Waterloo until his retirement. Together Henry and Laura grew vegetables and flowers for the Cedar Falls Farmers Market. They also enjoyed going to area casinos.

Henry is survived by his wife, Laura Lobeck of Waterloo; a sister, Eldora Seegers of Marion and many nieces and nephews. He was preceded in death by his parents, brothers, Edward, Hugo, Carl and Wilbert Lobeck; and his sisters, Valeska Buhr, Emma Ladage and Marlys Buhr.

Funeral Services will be held at 1:00 p.m. on Tuesday, September 24, 2019, at the Lutheran Church of the Good Shepherd in Waterloo. Burial will be held in St. John’s Lutheran Cemetery, Sumner with military rites at the grave by Acker-Matthias American Legion Post #653 of Denver. Visitation will be held on Sunday from 3:00 p.m. to 5:00 p.m. at the Kaiser-Corson Funeral Home in Denver and also for one hour prior to services on Tuesday at the church.