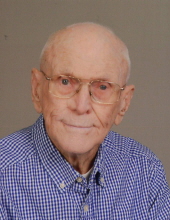 Harvey Harlan Carolus entered the United States Army Air Corps on April 9, 1943, in Camp Dodge, IA, served during the World War II era and reached the rank of Corporal before being discharged on February 25, 1946 in Jefferson Barracks, MO.

Harvey Harlan Carolus is buried at Harlington Cemetery in Waverly, Iowa and can be located at

Harvey was born on December 28, 1922, in rural New Hartford, Iowa, the son of John and Anna (Harms) Carolus. At the age of 4 he moved with his family to a farm near Kesley, Iowa, and attended Madison #8 country school near his home. Following his schooling, Harvey helped his father farm. On April 9, 1943, he entered the U.S. Army Air Corps during W.W. II and worked as an aircraft engine mechanic. Harvey was stationed in Florida, and on July 30, 1944, was united in marriage to Grace Alice Lageschulte in Avon Park, Florida. The couple made their home in Lake Wales, Florida until Harvey’s honorable discharge from the service on February 25, 1946. The couple then returned to Iowa and made their home near Grace’s family near Bremer. The couple farmed near Tripoli and later Frederika before moving to their farm N.W. of Bremer in 1955. The couple retired from farming in 1985 and moved to Waverly, turning over the farming operation to their grandson, Wayne Carolus. In February of 2015, they became residents of The Meadows in Shell Rock. After 73 years of marriage, Grace passed away on Saturday, March 24, 2018.

Harvey was a member of Heritage United Methodist Church in Waverly; he was active with Gideon’s International, served several years as treasurer of the local chapter and participated in Bible distributions on college campuses. Harvey was also a Bremer County Farm Bureau Member, and served 15 years on the Board of Directors for Readlyn Farmer’s Coop. Other memberships included the American Legion Post #176, Hospital Auxiliary, 60 and Growing, and Walk and Talk. Harvey loved volunteering at the Waverly Health Center and working with Habitat for Humanity in both Waverly and Waterloo.

Harvey is survived by two sons, Gordon Carolus (Dianne Nagen) of Waverly, Iowa, and Duane (Martha) Carolus of Bellevue, Nebraska; 6 grandchildren; 14 great-grandchildren; and two sisters, Laura Devries and Joanne Gronewold, both of Ackley, Iowa. Harvey was preceded in death by his wife, Grace; a sister at birth; a brother, Claire Carolus; a great-grandson, Coltin Carolus; a daughter-in-law, Joanne Carolus; several brothers-in-law and sisters-in-law.

Funeral services will be held at 11:00 a.m. on Tuesday, December 3, 2019, at Heritage United Methodist Church in Waverly, with Pastors Bob Holdorf and Rick Burns officiating. Burial will follow in Harlington Cemetery, Waverly, with military honors conducted by the Waverly Area Veterans Honor Guard. Visitation will be from 4:00 to 7:00 p.m. on Monday, December 2, 2019, at033213 Kaiser-Corson Funeral Home in Waverly, and one hour prior to the service at the church on Tuesday. Memorials may be directed to Gideon’s International or Heritage United Methodist Church. Online condolences for Harvey’s family may be left at www.kaisercorson.com. 319-352-1187