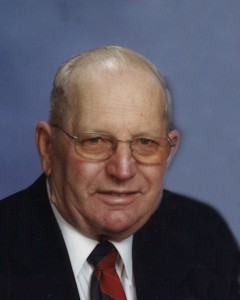 Harry Arthur Janssen entered the United States Army on December 1, 1944, in Fort Snelling, MN, served during the World War II era and reached the rank of Technician 5th Grade before being discharged on November 7, 1946 in Camp Atterbury, IN.

Harry Arthur Janssen is buried at Harlington Cemetery in Waverly, Iowa and can be located at

Harry A. Janssen was born July 23, 1926 in Des Moines, Iowa. Harry had many fond memories of growing up on the family farm near Chapin and the good times while attending Plainview Country School. Upon graduation from eighth grade he became a full-time farm hand on the family farm and for other farmers in Franklin County. In 1944 he joined the US Army and proudly served his country in the Pacific Theater during World War II. Injured in 1946, he returned stateside for treatment and continued to serve his country for the next 30 years as a member of the Iowa Army National Guard.

Harry married Kathryn Patton on April 6, 1952. Harry worked for the ASC in Franklin County, and for Sieg Company Auto Parts in Hampton and Waverly. He managed the Waverly Big Bear Store until his retirement. Harry returned to school later in life and earned his GED in 1975. He went on to get his real estate license and spent many years doing real estate appraisals.

He was active in Cub Scouts and served as Pack Leader, was involved in Lions Club, was a member and served on the board of the Bremer-Butler-Chickasaw Board of Realtors, a member of Waverly AMVETS Post #79, and a member and former Commander of the Waverly American Legion Post #176.

He was preceded in death by his parents, Herman and Blanche Janssen, siblings and their spouses, Harvey and Hope Janssen, Walter and Pearl Janssen, and MaeFerne Wenzel; niece Deb Obrecht; nephews Merlyn Wenzel, Kevin Janssen and Rohny Meyer.

Funeral services will be held at 10:30 am on Friday, October 30, 2015, at Trinity United Methodist Church, in Waverly, Iowa, with Pastor Debra Coble-Wise officiating. Burial will follow at Harlington Cemetery in Waverly, with military honors provided by the Waverly Area Veterans Honor Guard. Visitation will be held from 4 to 7 pm on Thursday, October 29, 2015 at Kaiser-Corson Funeral Home in Waverly. Memorials may be directed to the family for later designation. Online condolences may be left at www.kaisercorson.com. Kaiser-Corson Funeral Home in Waverly is assisting the family. 319-352-1187 – See more at: http://www.kaisercorson.com/obituary/Harry-Arthur-Janssen/Waverly-IA/1555207#sthash.jO4UyEs1.dpuf