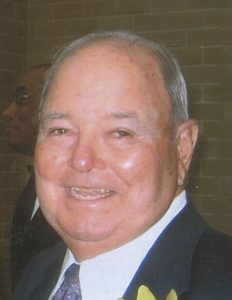 Harold Roger Snyder entered the United States Army on February 5, 1952, in Des Moines, IA, served during the Korean War era and reached the rank of Sergeant before being discharged on February 4, 1954 in Fort Benning, GA.

Harold Roger Snyder is buried at St. John's Lutheran Cemetery in Sumner, Iowa and can be located at

Funeral services will be held 11:00 a.m., Friday, October 13, 2017, at St. John Lutheran Church in Sumner with Rev. Curt Schneider officiating. Burial will follow at the church cemetery with military rites by Thomas E. Woods Post #223, American Legion of Sumner. Visitation will be held Thursday, October 12, from 4:00 p.m. to 7:00 p.m., at Becker-Milnes Funeral Home in Sumner and for one hour preceding services at the church on Friday. Memorials may be made in his name to Thomas E. Woods Post #223, American Legion of Sumner or Sumner Emergency Medical Services.

Harold (Pat) Snyder, son of Wordie and Anna Loughe Snyder, was born September 6, 1931 in Maywood, Illinois. His family moved to Sumner in 1940, where he attended school, graduating from Sumner High School in 1951.

Harold served in the U.S. Army as a paratrooper in the Korean Conflict. He was confirmed June 29, 1952, at St. John Lutheran Church, Sumner and that same date was united in marriage with Carol Buhr, at St. John Lutheran Church, Buck Creek. After his discharge from the armed forces, the couple made their home in Sumner. He operated his own service station for several years, and later managed the family produce business. He owned and operated Snyder’s Tap and Pool from 1970-1993. In later years he was employed part time by Sportsmans Quest and Gray Transportation.

He was a member of St. John Lutheran Church, Thomas E. Woods Post #223, and a past member of the Masonic Lodge and El Kahir Shine Club. He loved golf, and was a lifetime member of Meadowbrook Country Club. Pat and Carol played couples tournaments throughout Iowa together during the 70’s and 80’s. He always enjoyed hunting and fishing, especially cherishing the many trips with his sons, grandchildren, and close friends. Pat officiated football and basketball at the high school and collegiate level for over thirty-five years.

Harold was preceded in death by his parents; a brother, LeRoy; an infant sister, Vera; a daughter-in-law, Terese Reisdorfer Snyder; and brothers and sisters-in-law, Harold and Helen Schultz, Lester Juhl, Russell Dillemuth, and Allen Buhr.