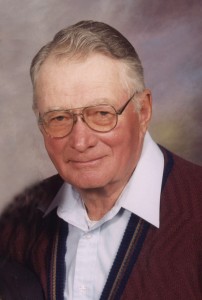 Harold Alfred Lindeman entered the United States Navy on January 19, 1946, in Waterloo, IA, served during the World War II era and reached the rank of Seaman First Class before being discharged on November 6, 1947 in San Pedro, CA.

Harold Alfred Lindeman is buried at St. Mary's Catholic Cemetery in Waverly, Iowa and can be located at

Harold was born on February 18, 1928, in Dysart, Iowa, the son of Alfred and Inez (Gnagy) Lindeman Heine. On January 1, 1946, Harold entered the U.S. Navy during WWII and was stationed in Long Beach, California, when he met his wife, Mary. Harold was baptized and confirmed prior to his marriage on August 24, 1947, in Compton, California. On November 6, 1947, Harold was discharged from active service, but continued his military career with the Navy Seabees reserve unit for 30 plus years. The couple lived in Cedar Falls, Iowa, where Harold worked as a farm hand. In 1950, they moved to Janesville, and later that year moved to Waverly. Harold worked for the City of Waverly – Street Department, Whitney Juhl Tractor and Bremer County Secondary Roads retiring in 1990. Mary died on March 27, 2002, Harold continued to live in his home until July of 2014 when he became a resident of the Bartels Lutheran Retirement Community.

Harold was a faithful member of St. Mary Catholic Church in Waverly and a member of Antique Acres in Cedar Falls, where he enjoyed his hobby of restoring old tractors. Harold and Mary loved to travel in their motor home, square dancing and dearly loved spending time with family and friends.

Harold is survived by three sons and their wives, Dennis (Ronell) Lindeman of Ames, Iowa, David (Peggy) Lindeman of Lakewood, California, Douglas (Maria) Lindeman of Whittier, California; one daughter and her husband, Mary Ann (Tom) Hinders of Waverly; seven grandchildren and four great grandchildren; Harold was preceded in death by his parents; his wife, Mary in 2002; his daughter, Deborah Kay Lindeman in 1975.

Mass of Christian Burial will be held on Monday, October 26, 2015, at 10:30 a.m. at St. Mary Catholic Church in Waverly, with Fr. David Schatz presiding. Burial in St. Mary Catholic Cemetery with military honors conducted by the Waverly Area Veterans Honor Guard. Public visitation will be held on Sunday, October 25th from 3:00 p.m. to 6:00 p.m. with a scripture service at 6:00 p.m. at Kaiser-Corson Funeral Home in Waverly. Memorials may be directed to the Waverly Area Veterans Post. Online condolences may be left for Harold’s family at www.kaisercorson.com. Kaiser-Corson Funeral Home in Waverly is assisting the family. 319-352-1187 – See more at: http://www.kaisercorson.com/obituary/Harold-Alfred-Lindeman/Waverly-IA/1554207#sthash.FdIuZG1W.dpuf