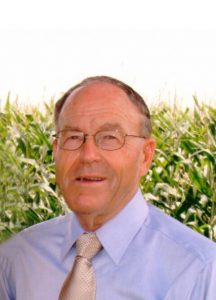 Harlan James Happel entered the United States Army on August 26, 1954, in Des Moines, IA, served during the Korean War era and reached the rank of Private First Class before being discharged on May 25, 1956 in Fort Sheridan, IL.

Harlan James Happel is buried at St. Paul Lutheran Cemetery in Readlyn, Iowa and can be located at

Harlan was born on February 16, 1935, on the family farm near Readlyn. He was the son of William “Bill” Henry and Esther C. (Matthias) Happel. He was baptized on March 10, 1935, at Immanuel Lutheran Church, Klinger and confirmed at St. Paul Lutheran in Readlyn. Harlan attended parochial school through 8th grade and graduated from Readlyn High School in 1953. He served in the United States Army from August of 1954 to May of 1956. On August 7, 1960, Harlan was united in marriage to Luann Ruth Diercks at Immanuel Lutheran Church, Klinger.

Harlan had a lifelong passion for farming. For 19 years, he delivered motorhomes for Winnebago. Harlan was a member of the Wayne Teisinger. V.F.W. Post 5661 of Readlyn and the Acker-Matthias American Legion Post 653 of Denver and served on many boards in the community. He enjoyed old cars, honoring our nation’s veterans, traveling, and visiting with family and friends.

He was preceded in death by his parents, twin granddaughters, Abbey and Alley Wittenburg and a grandson, Dusty Brunscheon.