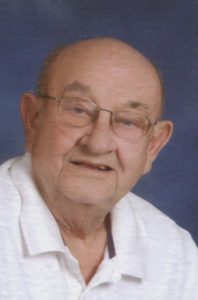 Gerald Alphonse Klosterman entered the United States Army on November 15, 1956, in Des Moines, IA, served during the Peacetime era and reached the rank of Specialist Fourth Grade before being discharged on November 13, 1959 in Fort Dix, NJ.

Gerald Alphonse Klosterman is buried at Pinhook in Sumner, Iowa and can be located at

Gerald A. “Jerry” Klostermann, 80, of Cedar Falls and formerly of Tripoli, died peacefully in his sleep on Monday, September 18, 2017, at his home in Cedar Falls.

Mass of Christian Burial will be held at 10:30 a.m. Friday, September 22, 2017, at St. Mary’s Catholic Church in Waverly with Rev. David Ambrosy and Rev. Ken Stecher concelebrating. Visitation will be held from 4:00 p.m. to 7:00 p.m., Thursday, September 21st at Rettig Funeral Home in Tripoli where the Rosary will be recited at 3:30 p.m. Visitation will also be for one hour preceding services at the church on Friday. Committal services will be held at 1:30 p.m. Friday with military rites conducted by Brandenburg-Krueger Post #4013, V.F.W. of Tripoli at Mt. Olivet (Pinhook) Cemetery of rural Sumner.

Gerald Alphonse, son of Alphonse and Alvina (Pape) Klostermann was born March 8, 1937, in New Vienna, Iowa. He was baptized and confirmed in the Catholic Faith. He received his education in the New Vienna Schools and along with his wife would later receive his G.E.D. Jerry enlisted in the United States Army in 1956 and was stationed in Germany before being honorably discharged in 1959. On February 18, 1963, he was united in marriage with Janet Esser at St. Mary’s Catholic Church in Guttenberg. The couple would move to the Tripoli area in the mid 1960’s. Jerry started working for People’s Natural Gas in August of 1960 and worked there until retiring in March of 1999. He was a long time member of St. Mary’s Catholic Church in Waverly where he was very active and served as a volunteer firefighter for the Tripoli Fire Department from 1969-2001. Jerry enjoyed traveling, going to Arizona and Las Vegas, Nevada to see family, going to the casino, the annual Labor Day picnics with his sisters, gardening, but most of all Jerry enjoyed spending time with his family.

In addition to his parents, he was preceded in death by his wife, Janet who died on June 15, 2014; two sisters-in-law, Perry McGeough and Connie Esser; and two brothers-in-law, Bernie Neuhaus and Paul Venteicher.