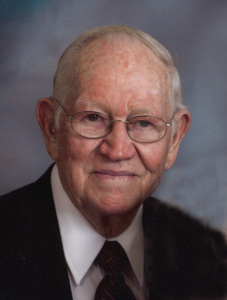 George Raymond Dewey entered the United States Navy on October 26, 1944, in Bayview, ID, served during the World War II era and reached the rank of Seaman First Class before being discharged on March 23, 1946 in Minneapolis, MN.

George Raymond Dewey is buried at Harlington Cemetery in Waverly, IA, Iowa and can be located at

Raymond was born east of Janesville, Iowa, on March 16, 1926, the son of Leslie and Stella (Cortright) Dewey. Raymond lived near Janesville until his seventh grade, when his family moved to a farm north of Waverly. He graduated from Waverly High School in 1944. In October of 1944, Raymond was drafted into the U.S. Navy. He served the majority of his service career on a destroyer, “The U.S.S. Rowan,” near Japan. He was honorably discharged in March of 1946. In February of 1949, Raymond joined Eastern Iowa Breeders Association and moved to Northwood, Iowa. On June 5th of 1949, Raymond was united in marriage to Emelda Harms at First Lutheran Church in Waterloo. The couple returned to Waverly in 1950, where Raymond continued in the breeding business for 25 years. In 1973, following 25 years of self-employment, he worked as Deputy Assessor of Bremer County retiring in 1988. After retiring Raymond worked part time at Wal Mart from 1993 to 2008.

Raymond was a member of St. Paul’s Lutheran Church in Waverly, Joe W. Cretzmeyer VFW Post #2208, Waverly American Legion Post #176, and in 1967, Raymond received an Honorary Lifetime Membership from the Waverly F.F.A. chapter. He enjoyed woodworking, playing cards, and later in life traveling with his wife, Emelda. Raymond’s greatest enjoyment, however, was spending time with his children and grandchildren.

Funeral services will be held at 10:30 a.m. on Monday, September 15, at St. Paul Lutheran Church in Waverly, with Pastor Curt Schneider officiating. Burial will follow in Harlington Cemetery in Waverly with the Waverly Area Veteran Groups giving honors. Visitation will be from 3:00 p.m. to 6:00 p.m. on Sunday, September 14, at the Kaiser-Corson Funeral Home in Waverly and one hour prior to services at the church. Memorials may be directed to Ray’s family, to be divided among several organizations and on-line condolences may be left at www.kaisercorson.com. Kaiser-Corson Funeral Home in Waverly is assisting the family. 319-352-1187 – See more at: http://www.kaisercorson.com/obituary/George-Raymond-Dewey/Waverly-IA/1419034#sthash.0OhgJXTd.dpuf