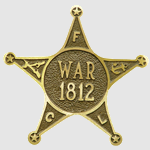 George L. Case entered the New York Troops on August 24, 1814, in New York, served during the War of 1812 era and reached the rank of Private before being discharged on November 8, 1814 in New York.

George L. Case is buried at Harlington Cemetery in Waverly, Iowa and can be located at

He was taken prisoner at the battle of Queenstown Heights New York, and was wounded. His grave has always been decorated by the G. A. R.