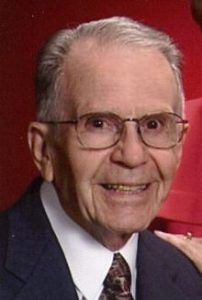 George Blake Worth entered the United States Navy on June 26, 1944, in Monroe, IA, served during the World War II era and reached the rank of before being discharged on June 10, 1946 in Great Lakes, IL.

George Blake Worth is buried at Harlington Cemetery in Waverly, Iowa and can be located at

A funeral service will be held 10:30 a.m., Friday, May 27, 2016, at the Smith Funeral Home in Grinnell with Rev. Dick Hutton, pastor of St. Mark Lutheran Church in West Des Moines, officiating. Pianist will be Conner Tipping and Meredith Tipper will be the flutist. Casket Bearers will be Meredith Tipping, Conner Tipping, Grant Young, Hanna Young, Brittney Worth and Blake Worth. Interment will be in the Harlington Cemetery in Waverly, Iowa.

Blake was born on December 20, 1924, in Monroe, Iowa to George Roy and Dottie Waring Worth. His family lived in the Monroe area and he graduated from Monroe High School in 1942. Following his education, he enlisted in the U.S. Navy and attended naval schools in Great Lakes, IL and Richmond and Norfolk, Virginia. He was deployed to the Philippines near the end of World War II and served in the Pacific Theatre.

On August 23, 1947, he was married to Irene Masick in Newton, IA. The couple lived in Grinnell and he was manager of the service center at Grinnell Implement until his retirement in 1989.

Blake was a hard worker and very loyal and dependable husband, father and grandfather. He was always willing to lend a hand to anyone needing his help. Keeping his home and yard neat was a top priority. Throughout his life, he enjoyed family activities and celebrations, golfing, walking, hunting, watching college basketball games and attending his grandchildren’s school and sports events. Blake especially enjoyed a trip to Washington, DC on an Honor Flight in 2012. He was a member of the American Legion.

Survivors include his wife of 68 years, Irene Worth of Grinnell; his children, Carol (Kevin) Young of Waverly and Brian (Carol) Worth of West Des Moines; four grandchildren, Meredith (Conner) Tipping of Mason City, IA, Grant (Hanna) Young of Iowa City, IA, Brittney Worth of Omaha, NE and Blake Worth of Dubuque, IA; one sister, Aldean Carter of Eagan, MN; and several nieces and nephews.

He was preceded in death by his parents; one brother; and three sisters.