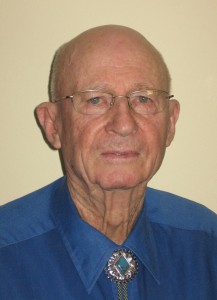 George Alexander Bridges entered the United States Army on May 24, 1944, in Camp Dodge, IA, served during the World War II era and reached the rank of Technician Fifth Grade before being discharged on October 21, 1945 in Camp Stewart, GA.

George Alexander Bridges is buried at Harlington Cemetery in Waverly, Iowa and can be located at

George was born on July 26, 1917, in Gladbrook, Iowa, the son of George Lee and Rachel Elizabeth (Elmore) Bridges. George was baptized at the age of 17 as a born again Christian in Tama, Iowa. He graduated from the 8th grade at Gladbrook Country School. On March 19, 1938, he was united in marriage to Ruth Catherine Callison in Gilman, Iowa. He served during the European Theatre with the U.S. Army 42nd Tank Battalion during WW11, from May 24, 1944 until honorably discharged on October 21, 1945. George worked at Western Grocery in Marshalltown for 9 years, farmed for 12 years in Waterloo and Plainfield areas for 18 years, worked at the John Deere office in Waverly for 2 years, and K & L Drapery in Waverly for 18 years.

George was a faithful member of the First Baptist Church in Plainfield. He was also a member of the American Legion Post #176 in Waverly. In his spare time, George enjoyed working on cars and John Deere Tractors. He also enjoyed spending time with family and friends.

Funeral services will be held on Wednesday, March 18, 2015, at 11:00 a.m., at the First Baptist Church in Waverly, with Pastors Dan Eloe and Shawn Geer officiating. Visitation will be on Tuesday, March 17, 2015, from 5 to 7 pm and from 8:30 to 9:15 am on Wednesday at the Kaiser-Corson Funeral Home in Waverly. The Patriot Guard Riders will lead procession from the funeral home to Harlington Cemetery for a 9:30 public interment service on Wednesday. Military graveside rites will be conducted by the Waverly Area Veterans Honor Guard. Memorials may be directed to Plainfield First Baptist Church. Online condolences for George may be left at www.kaisercorson.com.